PIJAC and your right to reef 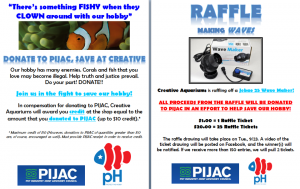 If you’ve been following NOAA’s recent findings regarding the health of coral reefs, and wondered how they will effect your right to own a slice of the ocean, then likely you’ve heard of the Pet Industry Joint Advisory Council (PIJAC). If you visit PIJAC’s website you will find links regarding responsible animal ownership, environmental stewardship and the infamous right to own a pet. That Habitattitude flyer you get with online fish orders, is actually the work of PIJAC, trying to encourage fish owners not to release their unwanted specimens into the wild. Underneath the spit shine, PIJAC stands as a lobbying group on behalf of the pet industry. Since reef keepers are pet owners, we would assume PIJAC stands to keep us informed, and fight the good fight in Washington, making sure our right to keep a pet is protected.

Lobbyist is a term with a lot of taboo surrounding it. To a degree, it’s a bit of a secret just what they do, but each major U.S. industry has them. You’ve probably heard of the famous lobbyist Jack Abramoff, and during his incarceration Abramoff has shed light on the role lobbyists play in Washington. The term is so discouraged, that lobbyists often go under the name advisor, which is ironic considering the “advisory” tag in PIJAC’s name. Lobbyists are supposed to share vital information with legislators on behalf of whom they represent. For example, a tobacco lobbyist will argue that smoking doesn’t cause cancer, and that those smokers stricken with cancer were genetically prone to the disease without ever taking a drag from a cigarette. Thanks to Jack Abramoff, we know that lobbyists also treat legislators to a host of nice gifts, such as box seat tickets to a big game, fancy dinners, etc – all for a chance to ally the legislator to support their said industry.

PIJAC did good work on behalf of aquarists, exposing science suggesting that the reef aquarium industry wasn’t devastating coral reefs. Though, as an aquarist, I feel overall they have lost sight of the big picture, and essentially dropped the ball, even though they keep running toward the goal. PIJAC could be instrumental in forming an education and regulatory body that can help assure that environmental and consumer abuses in the reef/marine aquarium hobby don’t take place. With Habitattitude, PIJAC has attempted to combine good husbandry with the environmental savvy not to release your pets into the wild. Although, aside from the flyer in your fish box (which often is quick to enter the trash) do many reefers even know what Habitattitude is? When we donate to PIJAC, is that money going to put educational resources in place for reefers and legislators, or for season tickets for some elite Washington official?

The future of the hobby lies in education. From the soccer mom buying her kids their first clownfish, to a marine aquarist upgrading their 55 gallon fish only tank to a full blown reef. That education must start with ocean literacy, making potential and current aquarists aware of the vital role the ocean plays in human health, and balance on planet Earth. Appreciating oceanic ecosystems is not only vital to the future of our planet and environment, but understanding the biology of coral reefs is vital in being a successful aquarist. If PIJAC proposed some form of education for reef keepers to legislators, we could have a win-win for the long-term future of the hobby. Combine this with laws that lay ground rules for marine life sales, and a sustainable road to reef keepings future could be laid. 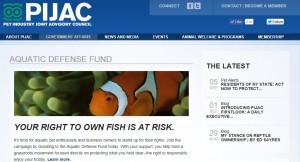 Instead, PIJAC has turned to sensationalism, making the situation for reef keeping’s legal future appear far more dire than it truly is. Yes, NOAA did recently propose placing 22 new coral species on the threatened species list (a list previously occupied by only two Caribbean coral species) and yes many are popular aquarium corals. It’s important to note, that as of yet, that placement has resulted in no new legislative changes for reef keepers, but more important to note the proposal originally was for 62 species, and when PIJAC introduced the results of their studies, NOAA dropped 40 coral species from the proposed listing.

What’s worse is that PIJAC is spreading the idea that if these 22 species of threatened corals are suddenly illegal to sell, propagate, keep or trade, the reef aquarium hobby is dead. That’s simply not the case, as there are hundreds of species of corals available to hobbyists, losing the legal right to keep 22 certainly would not equal the hobbies’ demise. Reality is simple, if the reef aquarium hobby is making an impact on natural coral reefs, and refuses to police itself and create ground rules that ensure marine life is treated with respect once it becomes a retail item, action will have to be taken to preserve the natural environment.

Mike Paletta recently wrote about an unspoken code among reefers that existed years ago, when the hobby was still in its early stages, and the number of reef aquarists was relatively small. A time when coral was fragged and traded, not to make a quick buck, but so that the hobby would have a good supply of beautiful animals. It was this code that helped spark the ability to captive propagate corals. The code included details about not snapping off chunks of coral so small, that they would not survive. Today we see tiny slivers of coral colonies selling for what it used to cost to set-up an entire marine aquarium. When I entered the hobby, the old code was still in full effect, and shop owners would give me coral frags, seeking only to be repaid with a frag of something nice when and if I had one available. If you had success breeding a marine fish, you shared the juveniles with other hobbyists, spreading the love. Today, if a clownfish has a unique trait, it often has a unique price tag, in many cases exceeding the cost of high end filtration equipment. The “hobby” has transformed into an industry, and one that has opened the flood gates for countless people to make fast money from their basement, selling something that was once shared among people with a common goal, healthy livestock and captive propagation. 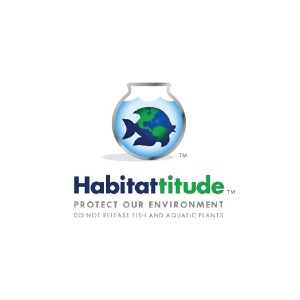 I understand that PIJAC’s goal is to defend the industry. Though, we as reef aquarists must ask, is the current trend of big money for tiny corals really the future we want for our beloved hobby? Should the size of one’s wallet, rather than their skills as an aquarist, be the deciding factor on whether they have access to beautiful livestock? There was a time when vendors and aquarists worked together, for the betterment of the hobby, a symbiotic relationship not unlike those we observe in our aquariums. Today, those relationships are quickly becoming a relic of the past.

Many of the great innovations in this hobby have come from private aquarists, using information, experience and an “out of the box” thought process to break through the confines, and progress the hobby, sharing it with their fellow aquarist. I believe it will be that same spirit that carries on reefing for generations to come, not a lobbying group collecting donations and supplying some legislator with free meals and NFL tickets. PIJAC wants your money, and they want you to believe they are fighting to defend your right to reef. Are they fighting for the right to reef, or the right to profit from reefing, with as little concern about the long term environmental effects as possible?