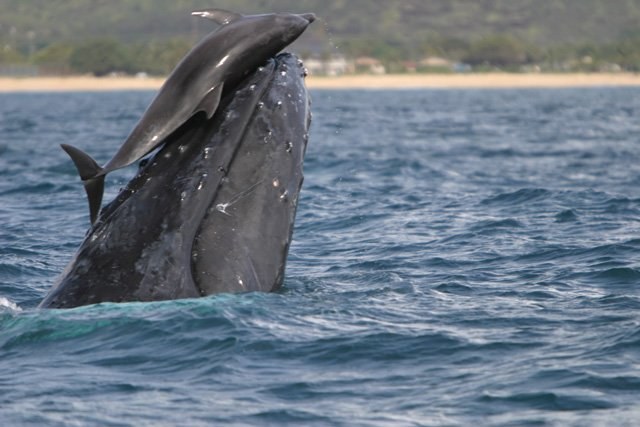 It’s not just for humans any longer. Photo by L. Mazzuca.


In their paper “Two Unusual Interactions Between a Bottlenose Dolphin (Tursiops truncatus) and a Humpback Whale (Megaptera novaeangliae) in Hawaiian Waters” published in the journal Aquatic Mammals, researchers Deakos, Branstetter, Mazzuca, Fertl, and Mobley discuss this interesting interaction between dolphins and humpback whales just off the coast of Hawai’i.

The paper discusses two separate incidents of these two species interacting: one happening in 2004 and the other in 2006.

In the first incident, two dolphins approached a humpback whale just off the coast of Kauai and appeared to initially swim alongside the humpback. After a time, each in turn would lie along the whale’s rostrum (upper jaw or “snout”) where it would then be lifted casually out of the water up into the air by the humpback whale. The dolphins acted very leisurely about the whole act and then would slide down the whale’s rostrum back into the water.

The second incident (pictured right) was very similar to the first.

In both reported incidents the dolphins and humpback whales acted nonchalant which made the researchers rule out aggression or distress. The researchers concluded that the most likely scenario was some sort of inter-species play.

The below YouTube video shot in 2009 by Jime Friend illustrates the act: