Plastinated shark to be featured in upcoming exhibit 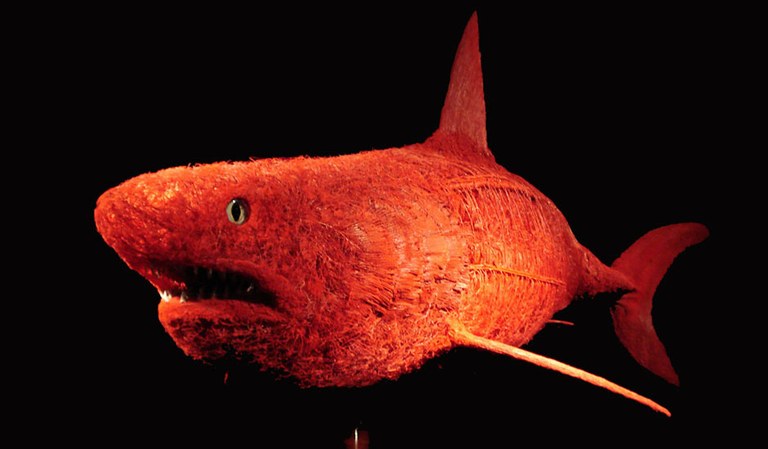 One of “Animal Inside Out” exhibits is this plastinated blue shark.


What is plastination? Essentially it’s an anatomy process that preserves body parts by replacing water and fat with a special blend of polymers. Once these polymers are properly cured the resulting body will not decay and retains most of the properties of the original.

This process was developed by Gunther von Hagens back in 1977 and has been continually refined through the years.  It was originally debuted to the public in his Body Worlds exhibit that featured human specimens subjected to the plastination process.  As can be imagined, this exhibit was highly controversial and resulted in public outcry on moral and ethical grounds.

Ten years later Gunther is bringing another plastinated exhibit to the public: Animal Inside Out.  Animal Inside Out will highlight over 80 animals ranging from giraffes, ostriches, octopus (above-right), rabbits, snails, sharks and even an elephant.

In the top photo, a meter-long blue shark was flayed and plastinated for the exhibit. As can be seen, this shark’s veins have all been plastinated with a red polymer giving a unique look inside this apex predator.  The process took over four months to complete.

“The shark is one of my favourites as it looks so striking. It is very special as the arteries in fish are so thin it is difficult to apply this technology, so this is the first time the preservation of blood vessels have been done in a fish like this.

“Most people have a picture of a shark as a dangerous beast, but when you look at this specimen you see it has a heart and blood vessels just like me.

“It is fascinating how people change their view of the animals when they look at the specimens we have prepared.”

These animals will all be on display at the Natural History Museum of London, England from April 6 – September 16, 2012. If you are in London, definitely check out this exhibit!