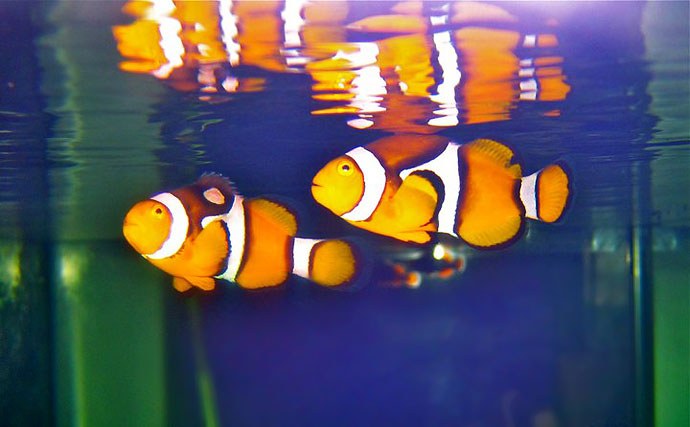 Picasso-like, naturally-occuring Clownfish … one of several unique fish we’ve seen out of PNG.


EcoAquariums PNG is the new exclusive PNG fish exporter.  EcoAquariums PNG was founded by Daniel Navin, a former employee of SEASMART.  In his blog, Matt Pederson of Reefbuilders points out some notable potential differences between EcoAquariums PNG and SEASMART.  The most notable difference is the mention of the word “decompression” on EcoAquariums PNG’s website, suggesting that collectors will now be allowed to capture fish with dive equipment.  SEASMART, on the other hand, was limited to collection by snorkel alone.  If true, this means EcoAquariums will have far greater access to variety of fish.  Also, there appears to be no “off-limits” species imposed on EcoAquariums.

“Rare fishes like this butterflyfish and some of the unique clownfish morphs we are seeing will, I think, reignite excitement for PNG’s marine aquarium fishery,” says Daniel Navin, director of EcoAquariums. Navin adds his fishers will not target obligate corallivores like this ornate butterflyfish unless it is for a very specific client who is prepared to meet the animal’s husbandry needs. “The point is that we have some pretty amazing and unusual fishes here in PNG, and our fishers are keen to begin collecting for aquarists desiring uniquely beautiful, incredibly healthy and sustainably collected animals.” In 2010, PNG captured the enthusiasm of aquarists worldwide with exceptional fishes like the lightning maroon clownfish. “It was, however, the potential for PNG to emerge as the first science-based, sustainable and equitable marine aquarium fishery that really drove market demand,” says Navin.

Navin was hired in 2010 by Seasmart, the company awarded the contract to explore establishing a sustainable marine aquarium fishery in PNG. When the joint NFA-Seasmart trial program ended late last year, Navin approached NFA for a license to export aquarium animals. “PNG NFA is among the Pacific’s most progressive, sustainably-minded fisheries agencies,” Navin says, pointing to PNG’s tuna fishery as an example. “NFA has poured millions into tagging programs and establishing one of the Pacific’s largest no-take zones.” When it comes to the aquarium fishery, NFA has already invested five million USD. “They want their aquarium fishery to be the most sustainable, equitable and well-managed in the world, and we at EcoAquariums are fortunate to be building on very solid work,” says Navin, referring to the detailed reef surveys, total allowable catch numbers and training of local fishers completed by NFA and Seasmart during the trial period. “Having said that, we are approaching the fishery in a far more market-driven fashion,” he says. “We believe there is a market for equitably-traded, sustainably-collected and maricultured marine aquarium animals, and we’re looking to target that market, while being both fiscally responsible and inventive in our approach.”