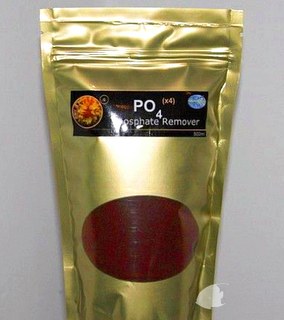 
According to Reef Interests (the same company that introduced both ReefPearls and NP BioPellets to the aquarium hobby), PO4x4 Phosphate Remover is a “unique chemical engineered polymer-based mini pellet” that can absorb up to 4x the amount of phosphate compared to other granular ferric oxide (GFO) products.  It is said to also better lend itself to fluidized reactors as it is non-clumping due to it being polymer-based.  They report 250 mL of PO4x4 will remove 3 ppm phosphate from 8,000 liters (~2110 gallons) of freshwater or 4,000 liters (~1060 gallons) of saltwater. Reef Interests also claims other GFO’s on the market release iron into the water column up to 10x that of natural saltwater, according to test results from the University of Wageningen, Holland.  Supporting documentation / test results for their claims of iron release and phosphate uptake are not available.

There is some speculation that PO4x4 Phosphate Remover might just simply be a polymer coated GFO which helps keep iron particulates from breaking off of standard granular ferric oxide products as it tumbles in a media reactor.  Also the claim that iron release into a saltwater aquarium is detrimental is open to debate.  Randy Holmes-Farley wrote two articles for Advanced Aquarist about iron and it’s effects on our tanks.  In his article Iron In A Reef Tank he suggests dosing iron as a possible way to increase macroalgae growth and decrease microalgae growth because captive tanks might be iron limited.  As of 4/26/11 Randy is still dosing iron into his system based on the aforementioned article.

Reef Interest also mentions their PO4x4 Phosphate Remover can be regenerated with a special “PO-X4 regeneration salt.”  This regeneration salt is reportedly poisonous, corrosive, and will react with water, acids, and other materials.  Regeneration consists of dissolving the PO-X4 regeneration salt powder slowly in water and then soaking the PO4x4 pellets in this solution for 24 hours.  After soaking, the user must wash the regenerated pellets 5-10 times with phosphate-free water until the pH is ~8 before it can be used again.  Personally, I believe this regeneration salt to be nothing more than sodium hydroxide or some other base. Matt Wandell and Laura Kormos wrote about using sodium hydroxide (a base) to regenerate GFO in our October 2010 issue in their article Regeneration of Granular Ferric Oxide Media with Sodium Hydroxide.

Reefbuilders reported earlier on the product and in their post published a YouTube video by “krzysztoftryc” of the PO4x4 mixing in a media reactor and this video can be seen below:

Interestingly enough, while I was researching this product I came upon information about another product that looks to be identical (or almost identical) to PO4x4;  Online reference of this product can be found all the way back to 2007.  The product’s name is “Opti-Phos,” and the last mention of it referred to the product on Polyp Lab’s website.  At the time, Opti-Phos is no longer listed on their website, so I pulled a Google Cache of the page to see if I could find out more information. Incidentally the product was last seen on Polyp Lab on May 2, 2011.

The description, reported benefits, directions for use, and regeneration protocol are very similar to PO4x4 Phosphate Remover.  The description also reinforces the speculation that the polymer bead is simply GFO coated with a polymer coating (see photo to the right).  Another interesting thing is that Polyp Lab specifies the regeneration powder:  sodium carbonate (a base).  Enterprising hobbyists should be able to easily find affordable sodium carbonate in the form of washing soda at their local stores. Interestingly enough, the Opti-Phos FAQ is still up on their site and it lists the following ways to obtain sodium carbonate:

What is not understood is that if PO4x4 is simply a polymer-coated GFO, how is it 4x more effective at phosphate uptake than other GFO products.

Is PO4x4 a new, innovative product or simply a rebranding of an older one to breathe new life into an aging product idea?