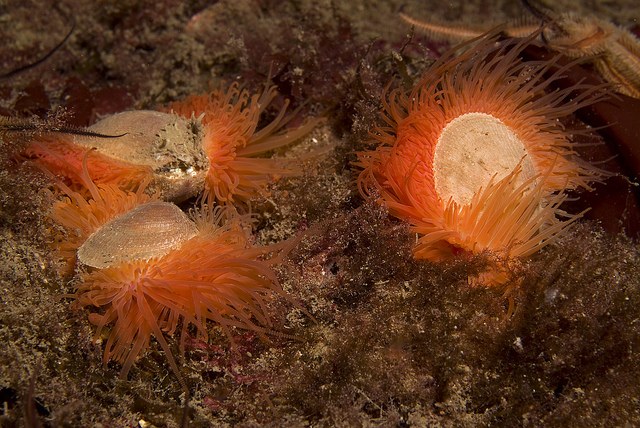 A huge colony of an elusive and brightly coloured shellfish species – numbering at least 100 million – has been revealed in coastal waters in the west of Scotland.

The Marine Scotland commissioned survey of Loch Alsh, a sea inlet between Skye and the Scottish mainland, has uncovered an extensive bed of flame shells. This small, scallop-like species has numerous neon orange tentacles that emerge between the creatures’ two shells.  Flame shells group together on the sea bed and their nests create a living reef that support hundreds of other species.

The Loch Alsh flame shell reef is much larger than expected, covering an area of 75 hectares. The overall population of flame shells in this area is likely to exceed 100 million and is the largest known flame shell reef anywhere in the UK – and possibly the world.

As part of the work to identify new Marine Protected Areas (MPAs), Marine Scotland has coordinated a programme of eight surveys during 2012, including Loch Alsh, covering more than 640 square miles of sea.

“The seas around Scotland are a hotbed of biodiversity and the clean and cold waters support many fascinating and beautiful species. With Scottish waters covering an area around five times bigger than our landmass, it’s a huge challenge to try and understand more about our diverse and precious sea life.

“The flame shell must be considered among the most remarkable species in our waters, with a dazzling array of orange tentacles. Many would place such an exotic species in far-flung tropical reefs – not realising they dwell under the waves just off the coast of Skye.

“This important discovery may be the largest grouping of flame shells anywhere in the world. And not only are flame shells beautiful to look at, these enigmatic shellfish form a reef that offers a safe and productive environment for many other species.”

“Too often, when we go out to check earlier records of a particular species or habitat we find them damaged, struggling or even gone. We are delighted that in this instance we found not just occasional patches but a huge and thriving flame shell community extending right the way along the entrance narrows of Loch Alsh. This is a wonderful discovery for all concerned.”

“Our job has been to advise Ministers on suitable places for MPAs and to do that we need to have enough information about what’s in the marine environment.  Whilst we had some records of flame shells in Loch Alsh, we had no idea how big the bed was.

“We needed more certainty before recommending them as a protected feature of this MPA proposal. It’s great to have this new information and it’s yet another example of the fantastic diversity of Scotland’s marine environment.”

“We are very excited to hear confirmation that these spectacular shellfish have been found in such profusion near Balmacara. The existing Special Area of Conservation does not protect these delicate and beautiful animals so we are delighted to see that the whole loch system has been proposed as a MPA.”

“We know from our own Seasearch surveys that flame shell beds are rich habitats deserving special protection. As contributors to the Scottish MPA project we were clear that where examples were known, whether in good condition or meriting recovery, they should be protected.

“Our Seasearch work also revealed the importance of this sea loch system for fireworks anemones, for which we submitted a third party MPA proposal. We also included flame shells, which were recorded but of unknown extent, so we are delighted that a government survey has revealed how extensive these beds are, strengthening the case for an MPA here.”

Flame shells (Limaria hians) build ‘nests’ by binding gravel and shells together with thin wiry threads. Flame shells, which are around 4 cm in length, group together in such numbers that the sea bed is covered by a felt-like organic reef of nest material several centimetres thick.  Internationally, flame shells are considered scarce and beds are found in only eight sites in Scottish waters.