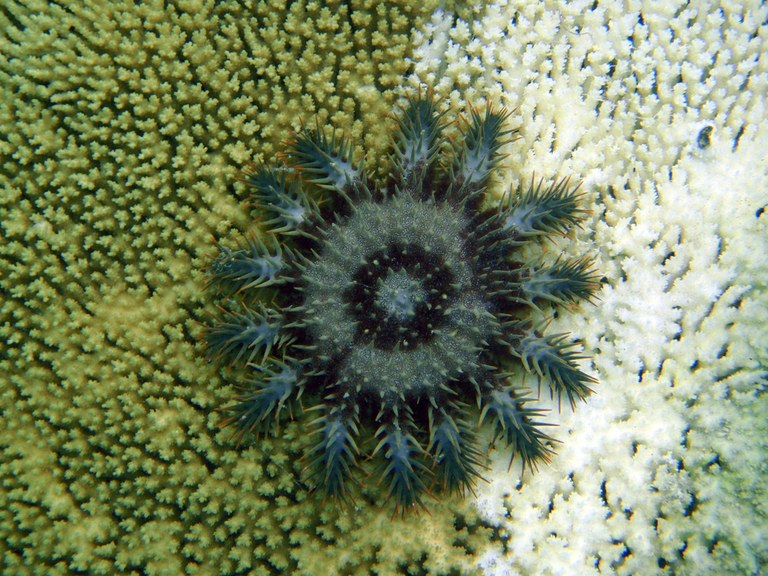 
Friday, I wrote about how Member of Parliament Bob Katter wanted to place a $10 bounty on every crown-of-thorns starfish as an added incentive for recreational divers to kill these dreaded reef predators.  As it turns out, findings this week by researchers may make this bounty obsolete.  The results are published in the September issue of the journal Diseases of Aquatic Organisms.

Drs. Rivera-Posada and Pratchett of the ARC Centre of Excellence for Coral Reef Studies, James Cook University, were on the beach at Lizard Island on the northern Great Barrier Reef when they had their “Ah-ha!” moment. As they were surveying the crown-of-thorns starfish invasion, Dr Rivera-Posada wondered if the protein mixture he was using back in the lab to grow Vibrio spp. bacteria might somehow give the naturally occurring Vibrio spp. in the starfish a boost to the point that they could kill their host starfish. This common microbiology agar, called thiosulfate-citrate-bile salts-sucrose agar (TCBS), was injected into crown-of-thorns starfish back in the lab and within 24 hours the starfish were falling apart from Vibrio spp. infection.

While it is still early, this route of eradication has a lot of potential.  For example, divers can only inject 40 crown-of-thorns starfish in a single dive using sodium bisulfate.  However, using TCBS they can inject up to 500 starfish per dive.

In an interview with the AAP, Dr Rivera-Posada gave a sobering idea of how dire things are:

“In the Philippines they removed as many as 87,000 starfish from a single beach. This gives you an idea of the numbers we have to deal with… Any attempts to control these outbreaks will be futile without also addressing the root cause of outbreaks, including loss of starfish predators as well as increased nutrients that provide food for larval starfishes.”

While this eradication method is a huge leap forward, there is still a long way to go.