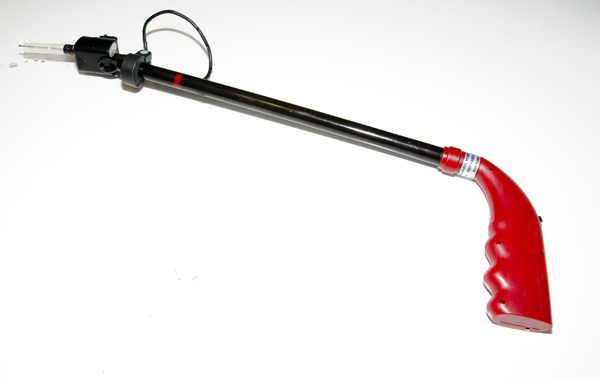 Every now and then aquarium industry is pleased with a device that raise eyebrows of fishkeeping enthusiasts and becomes a topic of discussion on internet forums, facebook walls as well as reefers’ get-togethers around the web. May it be for an incredible engineering, a beautiful design, a remarkable innovation or just for the simple confusion of hobbyist trying to figure out the purpose of it’s existence in the reefing world. Algae Mower Vac, the creation of one wise engineer, mister Kong Ho, surfaced in the reefing world at this year’s MACNA in Dallas and it quickly became one of the most interesting new things at the show’s floor. Is it good-looking? Well, if you are a fan of steampunk-like weapons, it surely will acquire to your taste. For the rest of us, the little aquatic tool is rather a weird looking stick than a piece of art. However, it shines in two other departments- innovation and effectiveness. How well it does that? I’ll explain in the rest of this product review, so stick around…

Let’s straighten some facts first- Algae Mower Vac, as name suggest, is an automatic tool designed to help reefkeepers (and less salty hobbyist as well) get rid of an unwanted algae blooms and other pests threatening the well being of their little pieces of ocean. “Automatic’ is a key word, setting Algae Mower Vac apart from other algae-removing devices on the market. Let’s peer into the retail box and see what’s inside… 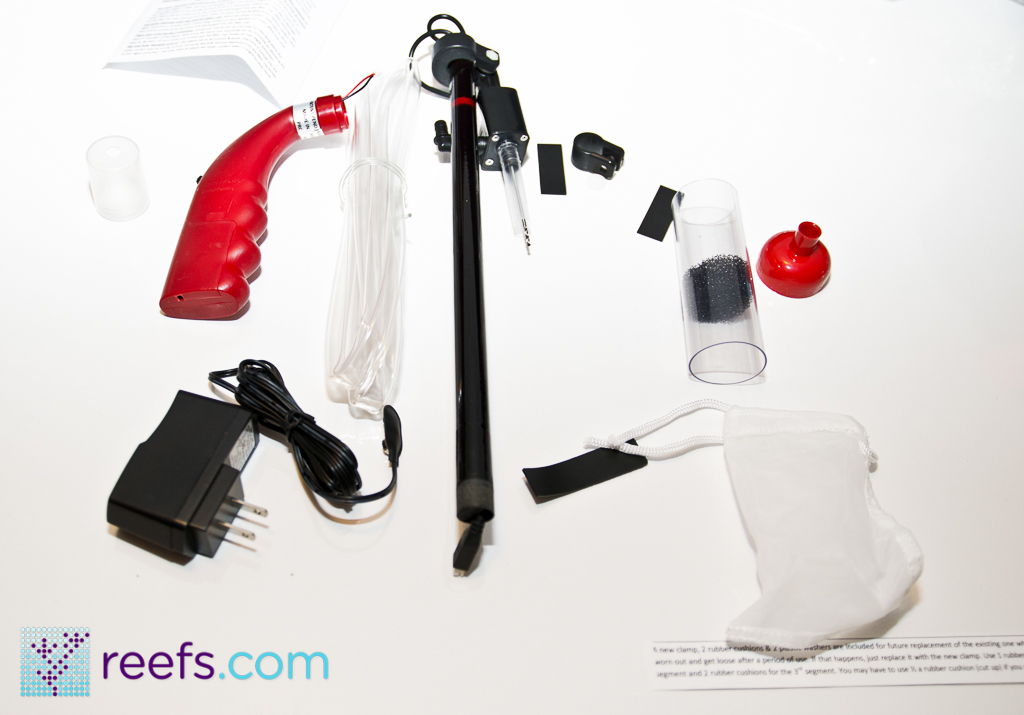 Algae mower came disassembled, in a cardboard retail box. Beside the main unit, the handle and wall adapter, there are vacuum attachment, a nylon bag and sponge to trap debris, a small screwdriver to get to the pump’s impeller, more than 6 feet of flexible hose, replacement clamp and rubber washers (in case the original ones wear off someday) and printed instruction.

The assembly process is very easy once you know what goes where. The instruction that came with Algae Mower isn’t very helpful in showing you how to put this thing together, however, there is a youtube channell dedicated to the unit and in one of the videos Mr Kong clearly shows how to assemble the product, which makes the printed manual obsolete.

I think the overall appearance of Algae Mower Unit is it’s biggest drawback, the little tool doesn’t look like an uniform product, but rather as a collection of over-the-counter elements put together in one unit. Nevertheless, we have to understand that this is not a device produced in large quantities by some international corporation, but a creation of one handy engineer and his crew. Once assembled, Algae Mower Vac does what it supposed to, just don’t expect your friends to be impressed by the looks of it (the non-fishy friends are going to think you’re nuts anyway when they see you working on your tank using a motorized stick with drill bit at one end).

Let’s now take a closer look on each element that Algae Mower consist off. Starting from the rear, we have a red handle with a battery compartment. 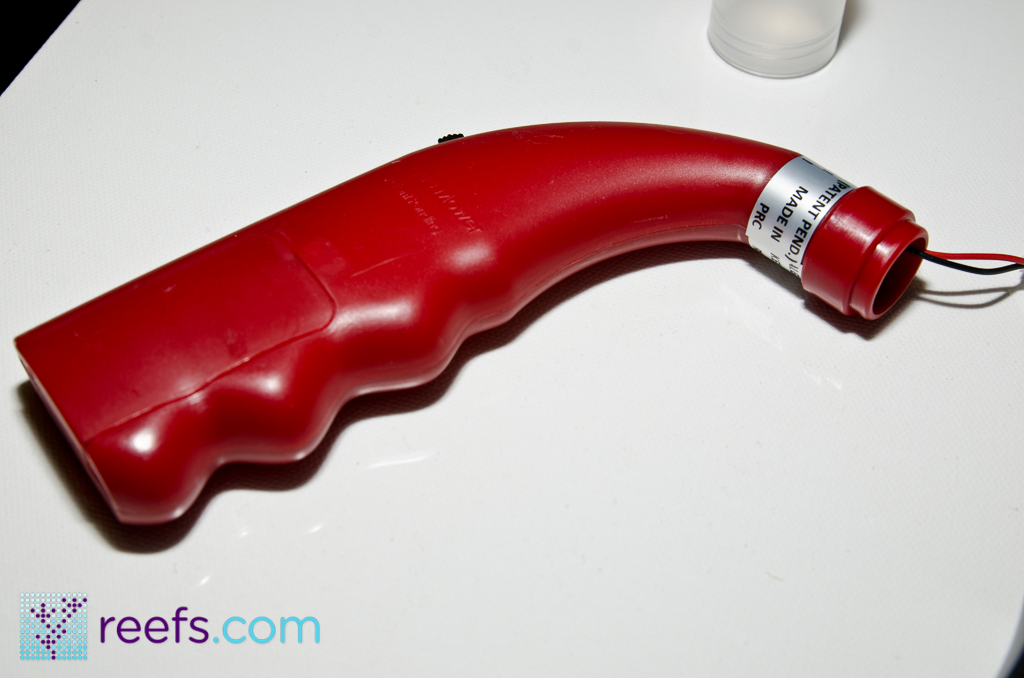 This is the only part of the tool that is not sealed and cannot be submersed in water. To power the unit, you can either make it wireless by connecting a 9V battery (not included), or by attaching an included 9V AC adapter. 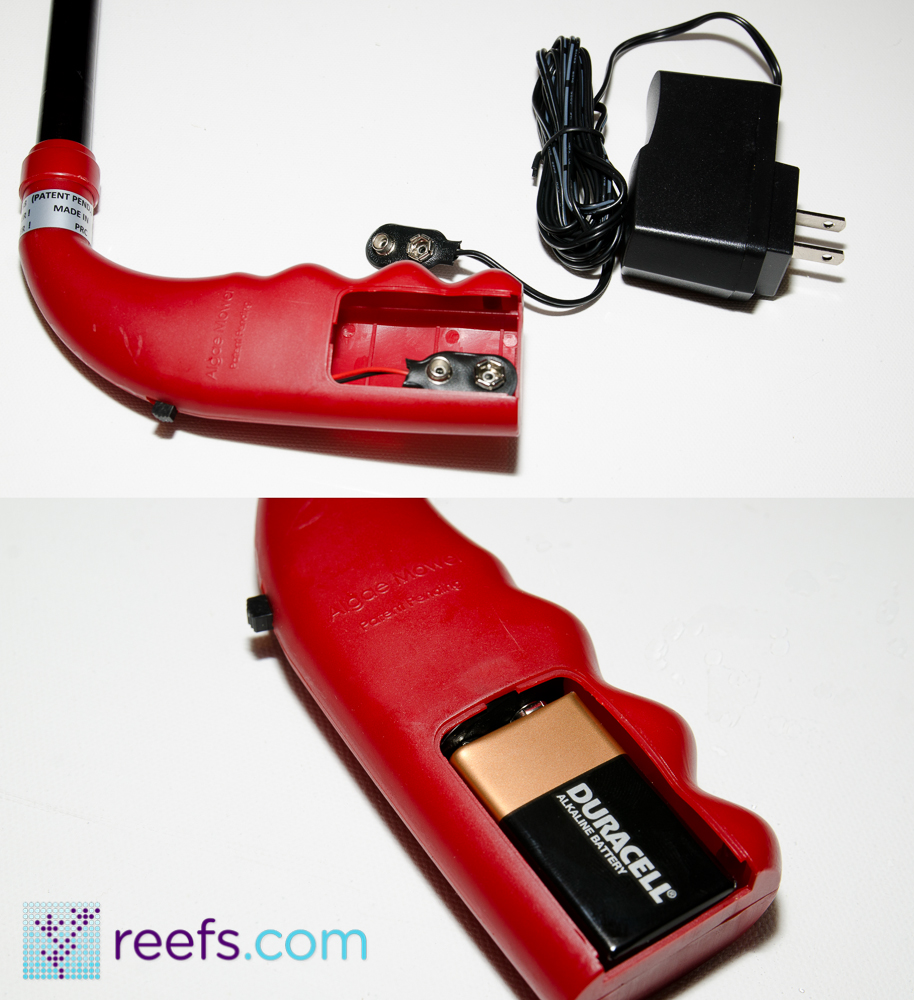 The handle itself is quite ergonomic, but I wish it was made of a higher grade plastic, as it doesn’t feel solid when using Algae Mower.

Moving on, the main unit is connected to the handle by a telescopic stick with the cable running inside of it. This part is made of carbon fiber and is very rigid while reducing the weight of the whole unit. Speaking off, Algae Mower weights just under 10oz with battery, so it doesn’t feel heavy on hand when used in extended maintenance sessions. The telescopic nature of Algae Mower Vac allows for maneuvering in both shallow and deeper tanks without problem. The unit extends any length between 18” (46cm) to 37′ (94 cm, measured from the tip of the drill bit to the end of carbon fiber rod). 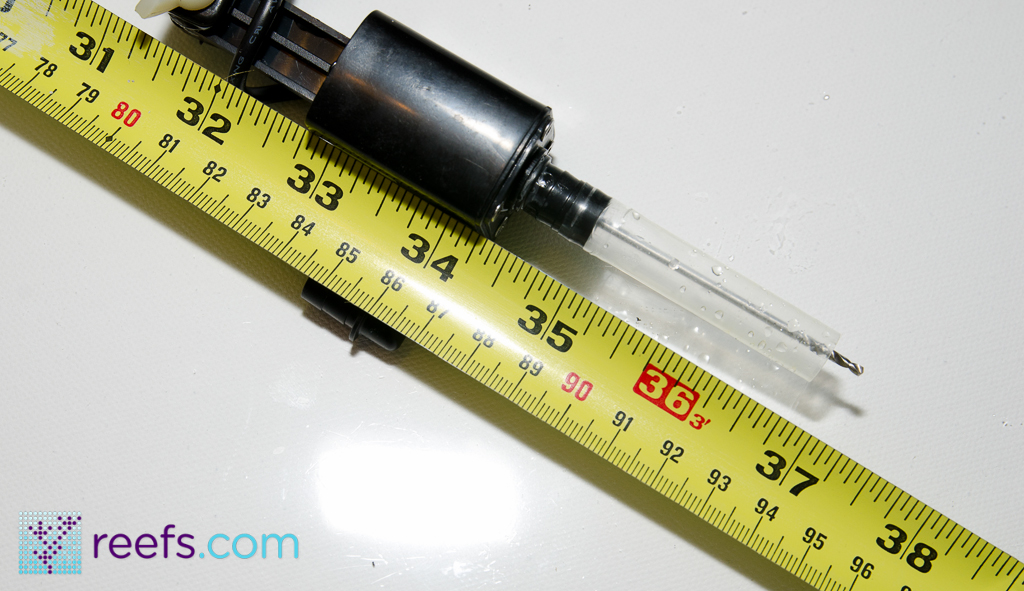 The only inconvenience is the cable running inside the carbon fiber tube- when it’s shorten to it’s minimum length, you need to bend the extra cable and force it inside the tube, which is a little tricky at first.

In the heart of Algae Mower lays a little powerhead attached to the rod with an adjustable plastic clip. 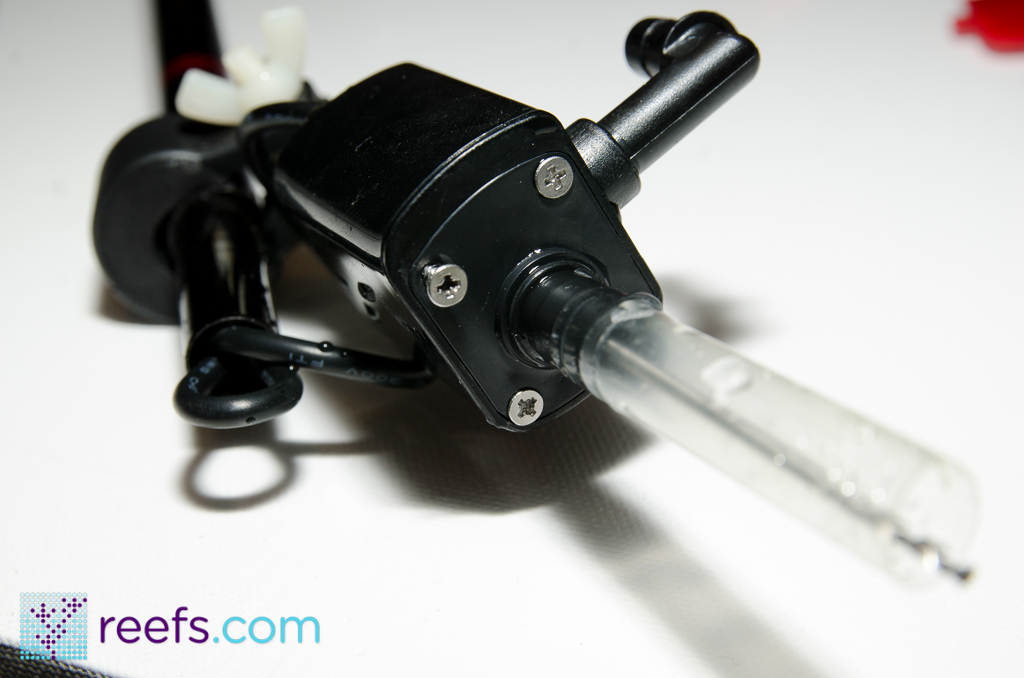 The powerhead’s impeller has been modified to receive an attachment in form of a stainless steel drill bit, while the outlet side of the pump can be matched with any of the three included attachments- a flexible hose, a sponge filter or a mesh sock.Confused? I was, too, until I submersed the Algae Mower Vac’s powerhead in my reef tank, flipped a switch on the handle and the magic started to happen…

Let me stop here for a little and state that despite the weird look and over-the-counter parts it’s built of, Algae Mower amazes with it’s versatility and effectiveness in cleaning algae from the tank. First of all, I’ll try to explain how the unit works…

A second after turning on, Algae Mower’s powerhead comes to life. The drill bit, encapsulated in a piece of tubing so that only the tip is exposed (for safety of the curious fish), starts spinning and the pump push out water at the other end. 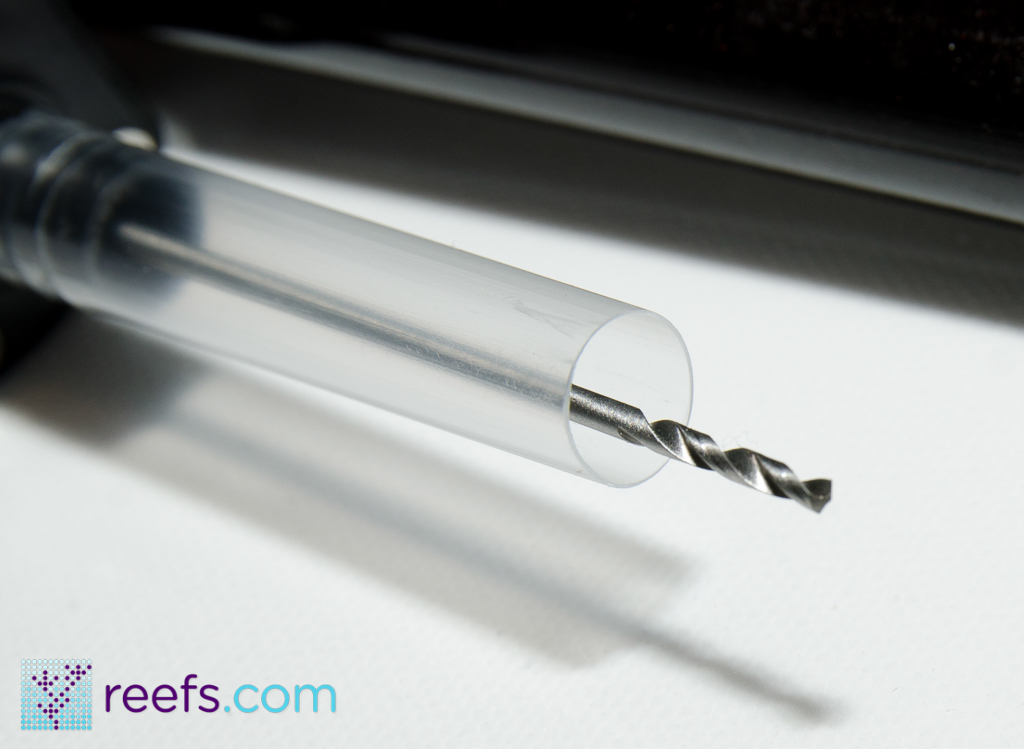 When the tip of the drill bit touches hair algae (or any other algae similar in appearance, for that matter), it twists and suck fragments of the algae, removing it from the live rock. It’s so good at it that after few strokes the targeted area is cleaned to the bare live rock. Algae Mower Vac usefulness doesn’t stop here, however- you can get rid of practically any kind of algae that can be scraped off the rock (macroalgae, bubble algae, coraline, cyanobacteria, you name it). In addition to that, the drill bit destroys pest anemones and debris accumulated in rock crevices (Algae Mower’s youtube channel feature a video where coraline algae is being scraped from the aquarium’s glass without making any scratches to it’s surface). You can also use it to grind and cut hard corals when colonies touch each other in fight for space, preventing bleaching and other diseases. Attaching the included syphon tube transforms Algae Mower into a power gravel vacuum. 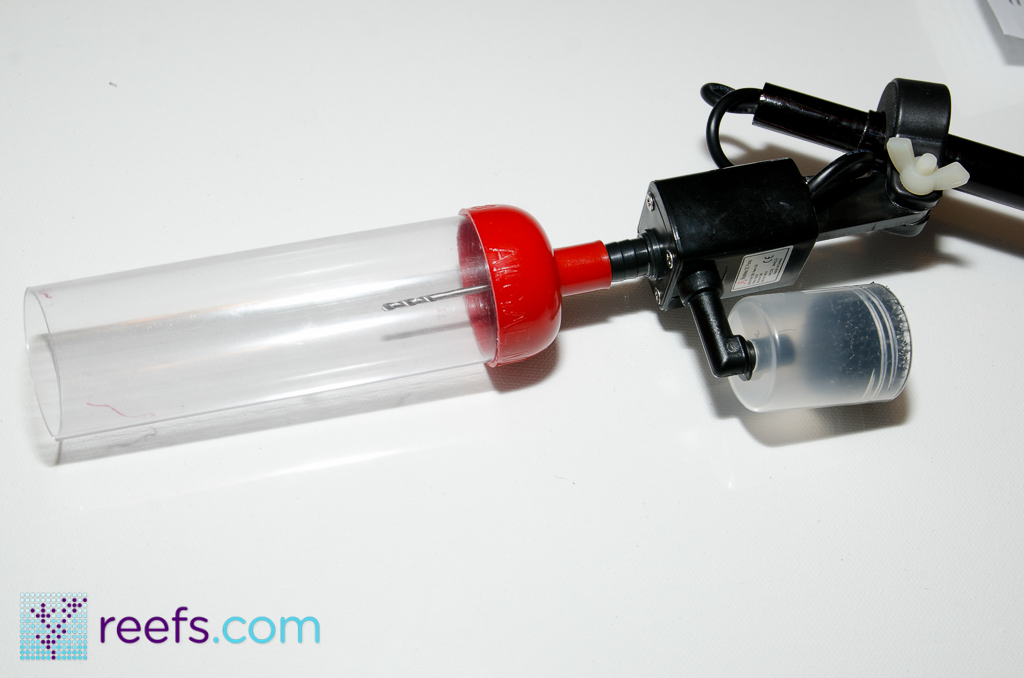 Looking on the other end of the pump, there are 3 options for collecting unwanted particles. There is a little cup with a sponge filter for small algae mowing jobs, a larger mesh sock for collecting more debris, and finally 6 feet of hose that you can suspend from the tank’s rim and use Algae Mower while doing water changes. 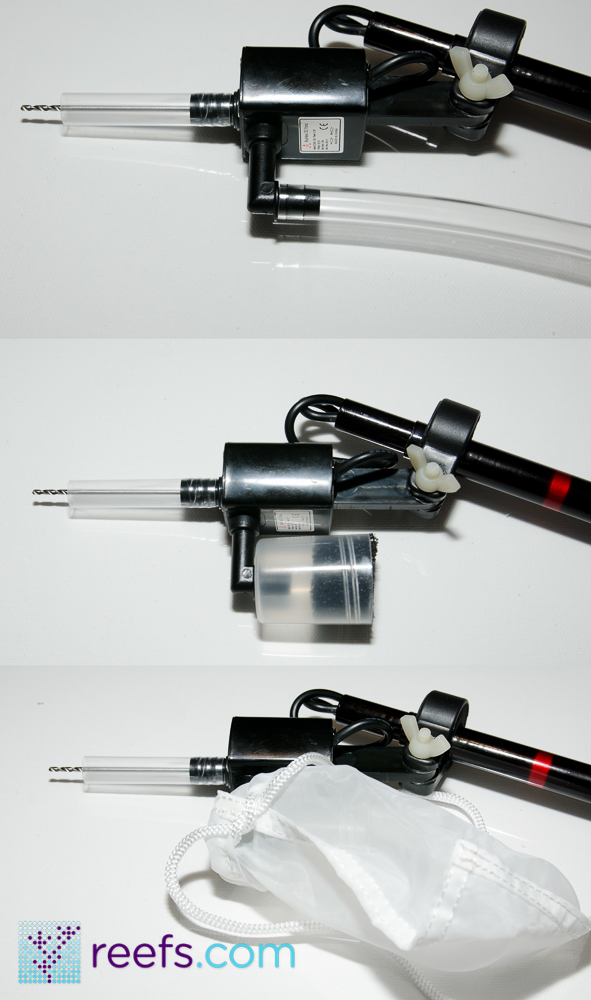 I tested this latest feature while doing a recent water change and Algae Mower’s powerhead managed to push water from the bottom of my 20” high tank to the bucket on the floor without any issues. The only minor drawback is that the pump’s impeller can get stuck with algae and sand particles sometimes and needs cleaning, however it’s a quick operation and doesn’t require a lot of effort from user’s side. 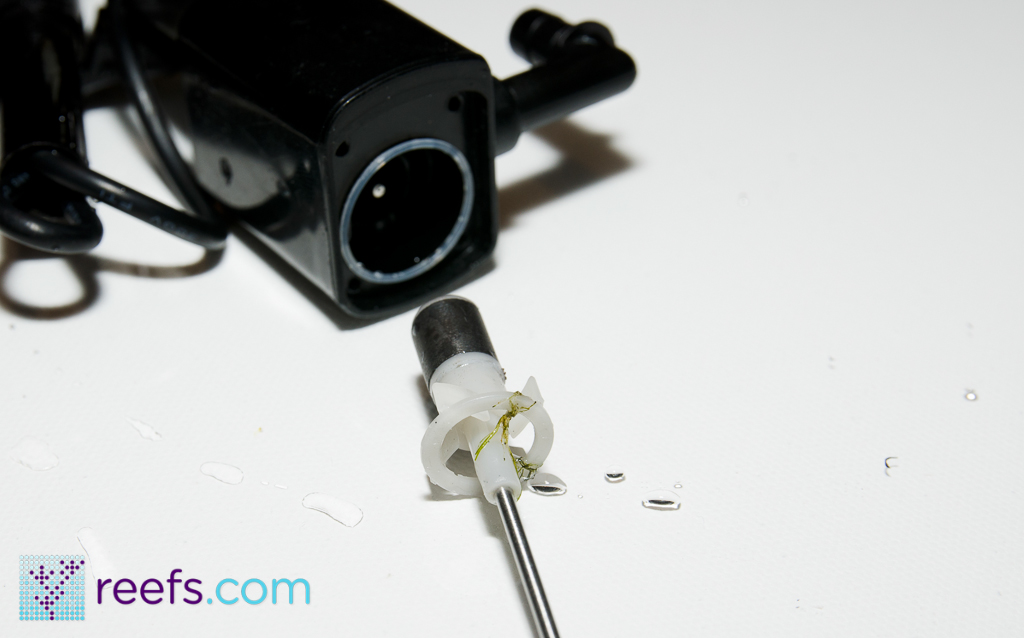 -Algae Mower is an incredibly versatile tool that helps getting rid of unwanted algae, pests and debris in a reef tank

-if you care about product design, Algae Mower Vac disappoints by looking more like a DIY creation rather than a professional tool

-built quality could be improved here and there, especially in the plastic handle and cord management departments

-the occasional clogs in the powerhead’s impeller- this is not a big issue, but I wish there was easier way than unscrewing 4 tiny screws to get to the impeller

Algae Mower, without doubt, has many uses and that will definitely be it’s strongest selling point. It doesn’t share the same design values as big aquarium goods manufacturers, but it simply does what it’s suppose to do and does it well. 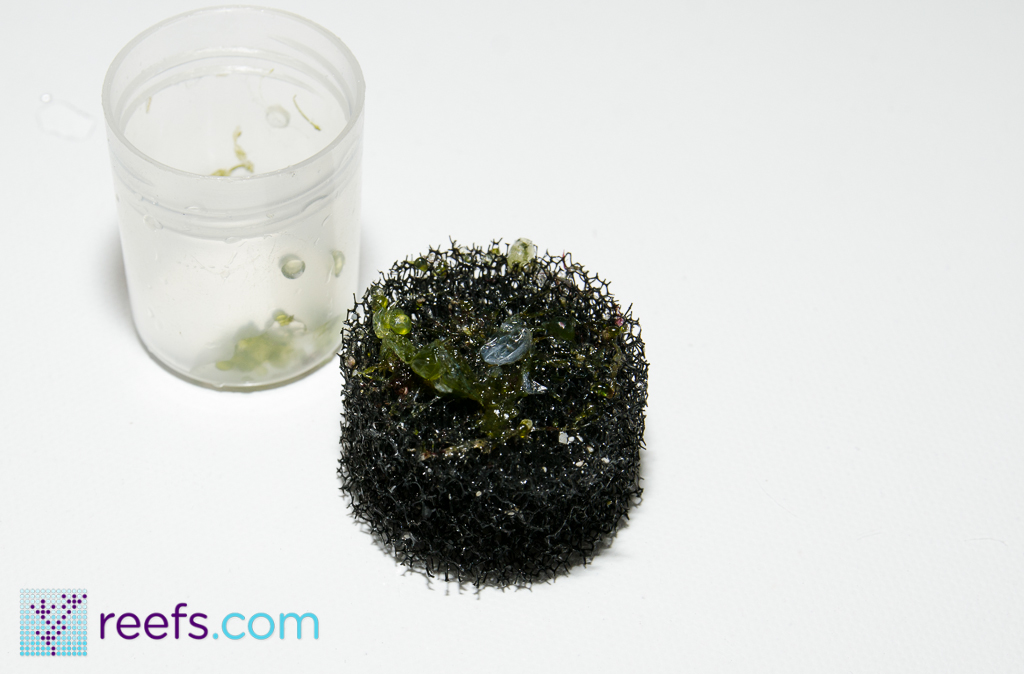 Removing hair, bubble or any other type of algae becomes fun task when using this tool. I can recommend it to everyone who needs help maintaining a sparkling clean look of his/her tank. Algae Mower is a powerful weapon and despite it shortcomings, you can’t really find a device so versatile and innovative in the hobby these days.

Algae Mower retails for $64.99 and can be bought directly from the company’s website at: http://www.algaemower.com