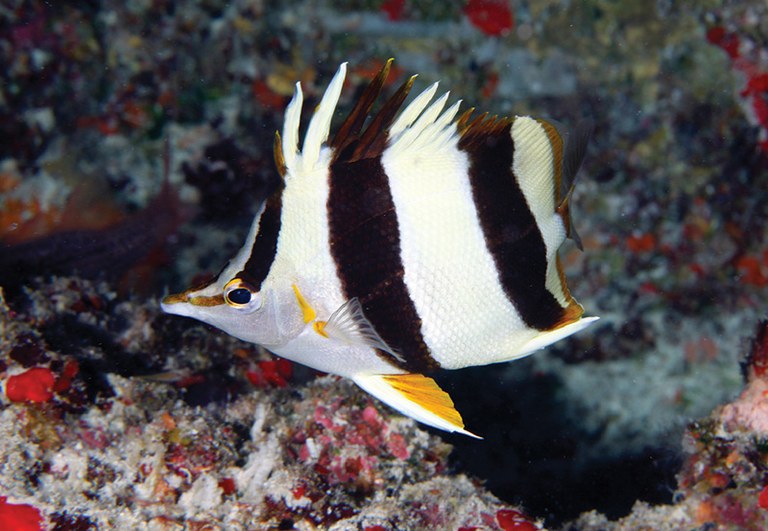 Prognathodes basabei at a depth of approximately 55 m off Pearl and Hermes Atoll, Northwestern Hawaiian Islands. Photo by G. McFall.


Prognathodes basabei calls Papahānaumokuākea Marine National Monument – the world’s largest marine protected area – its home.  It shares habitat with Hawaiian deep-water endemics such as the Bodianus sanguineus wrasse/hogfish and Odontanthias fuscipinnis anthias, as seen in the photo below where P.basabei is seen swimming upside-down under a reef overhang along with this anthias.

A group of three Prognathodes basabei at a depth of 90 m off Pearl and Hermes Atoll, Northwestern Hawaiian Islands. In the photo is the beautiful “holy grail” Hawaiian anthias, Odontanthias fuscipinnis. Photo by R. L. Pyle.

Prognathodes basabei is named “in honor of Peter K. Basabe, long-time diver, aquarium fish collector and resident of Kona, Hawai‘i, both for his role in the collection of the first specimen of this new species in 1998, and more generally for his extensive contributions and assistance to many researchers (especially the authors) in the ichthyological community.”