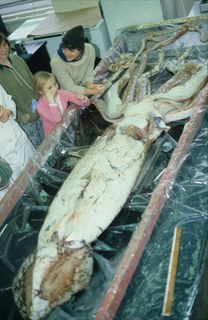 
Approximately 10 years ago, bodies of giant squid were found off the north coast of Spain. Interestingly, the remains appeared shortly after ships in the area had used their air guns to generate low frequency sonic blasts for oil and gas prospecting and other maritime exercises.

When the bodies of the squid were examined, the scientists found that their “mantles [were] reduced to pulp, [there were] bruised muscles, and lesions in statocysts”  (statocysts are an organ used by squid and other aquatic creatures for balance).

For quite a while, scientists suspected that loud sonic pulses could have produced the damage they saw in the recovered bodies and recently a study was published that many believe put this issue to rest and prove that loud sonic blasts are the culprit

As reported in NatGeo, scientists obtained a number of cephalopods – squid, octopi, and cuttlefish – and subjected them to loud (157-175 db), low frequency sound blasts (50-400 Hz) for two hours.  After the time limit was up, the cephalopods were either killed immediately or allowed to live for an additional 4 days before being killed.

Autopsies of the bodies indicated damage to the statocyst – specifically the tiny hairs in the statocyst which help the cephalopods balance. The damage to these hairs essentially crippled the animals swimming ability.  The animals that were left for four days before being killed showed additional damage to their statocyst – legions that are indicative of acute noise exposure over longer periods of time.

At the time of the giant squid deaths, “we hypothesized that the giant squid died in one of two ways: either by direct impact from the sound waves or by having their statocysts practically destroyed and [the squid] becoming disoriented,” Guerra explained.

“The disoriented animals might wander up from the depths to the surface, where the temperature difference kills them.”

Though the new research presents enough evidence to “raise the alarm,” more studies are necessary before a solid case can be made that human-caused noise pollution is causing pervasive damage to marine life.”