Pros and Cons of the Long-Term Marine Aquarium 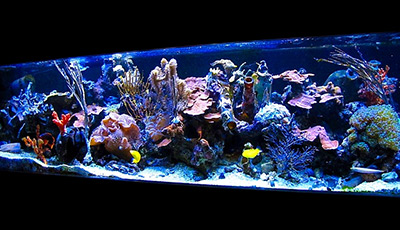 A recent shot of Paul B’s 40+ year old reef aquariumMany marine fish can survive in captivity for decades, and many corals and other sessile invertebrates can hang in there, well, who knows how long. In any case, maintaining a marine aquarium “for the long term” can mean an awfully long time. Just ask Paul B, author of The Avant Garde Marine Aquarist. His current tank has been up and running with much of the same livestock since somewhere around the Second Battle of Bull Run (being a New Yorker, Paul presumably wouldn’t have called it Second Manassas). My style of aquarium keeping also leans toward the long-term, so I thought I’d dedicate today’s post to what I consider the pros and cons of this approach (versus keeping specimens for relatively brief periods and frequently changing up your livestock) for those whose hobby experience doesn’t yet span decades:Pros: You gain a new respect for the growth potential of specimens—and thus the benefits of spacious housing. For example, reading that fish species X can reach Y inches/centimeters in maximum length doesn’t compare to actually seeing the genuine article fully grown and swimming around in your tank alongside a bunch of other fully grown specimens. MORE