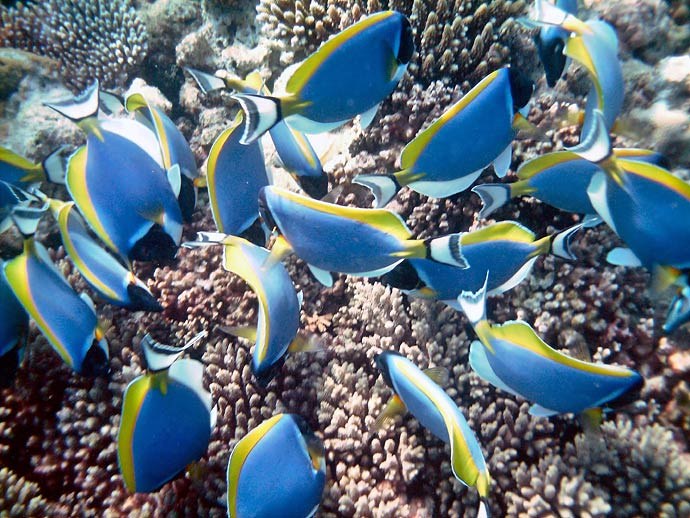 A team of researchers from the Georgia Institute of Technology is using the Aquarius underwater laboratory off the coast of Florida to study how the diversity of seaweed-eating fish affects endangered coral reefs. The research mission, which began Sept. 13, may provide new information to help scientists protect and even restore damaged coral reefs in the Caribbean.

Led by Mark Hay, a Georgia Tech professor of biology, the 10-day mission includes two Ph.D. students and a postdoctoral researcher who are living 50 feet below the surface in the unique underwater lab. Aquarius, which is about the size of a school bus, includes scientific laboratories and living quarters for up to six scientists who can live and work underwater for the entire length of the mission.

Hay’s research team has been studying how seaweeds and fish affect the health of coral reefs in the Pacific Ocean and Caribbean Sea. They have shown that the natural defenses of seaweeds can harm the coral, and that plant-eating fish can control the growth of the noxious seaweed. The new studies will build on that knowledge and provide new information on the complex factors affecting reef ecosystems.

“Consumption of seaweeds plays a critical role in structuring coral reefs and in selecting for algal traits that deter herbivorous fish,” Hay explained. “Recent studies have noted dramatic variance among species in the susceptibility of herbivorous fish to seaweed chemical and structural defenses. These differences can translate into dramatic direct effects of herbivore diversity on seaweeds.”

Because certain fish species eat specific seaweed species, and certain seaweeds are more damaging to coral than others, differences in the diversity of seaweed-eating fish can have a dramatic indirect effect on corals – as well as on changes in the structure and function of the endangered reefs.

“Our mission to Aquarius will allow us to study experimentally how herbivore diversity may be managed to conserve and even restore reefs,” Hay added. “In previous studies, we have demonstrated that herbivore diversity affected the function and structure of the coral reefs. We plan to build on that research in this new study through Aquarius.”

During the 10-day mission, the researchers will evaluate changes in reef communities near Aquarius, where they have built large cages and enclosed different species of fish for the past ten months. Within the enclosures, they included specific species of fish, or mixes of different species. They will be evaluating the effects of these different fish and mixes of fish on the health and growth of the coral to determine:

Field studies by Hay’s group have previously shown that several common species of seaweeds in both the Pacific and Caribbean can kill corals upon contact using chemical means. While competition between seaweed and coral is just one of many factors affecting the decline of coral reefs worldwide, this chemical threat may provide a serious setback to efforts aimed at repopulating damaged reefs.

Seaweeds are normally kept in check by herbivorous fish, but in many areas overfishing has reduced the populations of these plant-consumers, allowing seaweeds to overpopulate coral reefs.

The new study will assess the impact of different species of seaweed-eating fish and compare those to previous results evaluating different mixes of fish. The goal will be to determine which specific mixes of fish can control the most damaging of seaweeds and to evaluate the importance of herbivore diversity in suppressing seaweeds and protecting corals. This information could be used to help manage fishing practices to protect the reefs.

“The particular biodiversity of herbivores may be as important as the density, or mass, of herbivores in determining the structure, function, and health of reef communities,” Hay said. “We know too little of the species-specific effects of reef herbivores, how effects of multiple species sum to produce an overall effect, or which particular mix of herbivores is critical for suppressing aggressive seaweeds to maintain reef function.”

Coral reefs are declining worldwide, and scientists studying the problem had suspected that proliferation of seaweed was part of the cause – perhaps by crowding out the coral or by damaging it physically.

By allowing scientists to remain on the ocean floor for long periods of time – a capability known as saturation diving – Aquarius helps researchers get more work done by extending the dive time at depth and eliminating the decompression time that would be required for returning to the surface each day. Owned by the National Oceanic and Atmospheric Administration, Aquarius is managed by the University of North Carolina Wilmington and located in the Florida Keys National Marine Sanctuary.