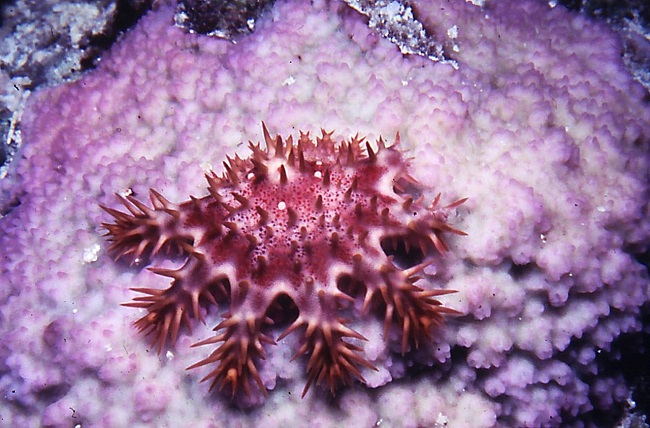 The crown-of-thorns starfish (Acanthaster planci) eats corals. Local populations of this creature can reach plague proportions. When this occurs, entire reefs can be left nearly devastated. In some cases, 40-90% of a reef may be devoured in a single event. Marine biologist Dr. Jaino Rivera Posada claims that the overall damage caused by the starfish over the last half century surpasses that of bleaching. He also warns that all signs suggest that the species is posed for a massive attack on the Great Barrier Reef.

In anticipation of a potentially huge crown-of-thorns starfish scourge, Dr. Posada and other researchers at the ARC Centre of Excellence for Coral Reef Studies (CoECRS) at James Cook University have stumbled upon a possible means of controlling the destructive corallivore. They found that injecting a particular animal tissue extract into the starfish caused it to die as soon as 24 hours later. The extract, a culture media, was originally intended to enhance growth of a Vibrio bacterium that inhibits growth of the starfish. To the researchers’ delight, not only did the substance produce the intended result, but it also (being a totally alien compound derived primarily from cow proteins) appeared to cause the starfish to suffer a severe allergic reaction.

Divers could deliver the extract with a single injection, making it feasible for an individual to destroy as many as 500 crown-of-thorns starfish in a day. Dr. Posada believes that a substance such as this would work much more effectively and safely than any of the chemicals currently in use.

More information about this study can be found at:
http://news.bioscholar.com/2012/10/researchers-find-killer-solution-reef-killer.html.