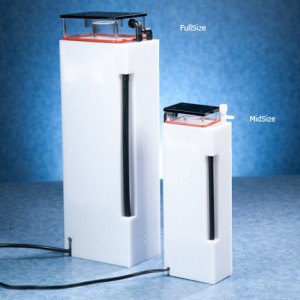 Protein skimmers, are in my opinion, the heartbeat of a reef aquarium’s filtration system. Some would disagree, and beautiful, skimmer-less reefs certainly do exist. Any device that remove solid waste, before bacteria begins breaking it down, is of value in a reef aquarium. Most of us are intimate with the chemical mechanisms that allow skimmers to work, so instead of re-share old information, I am going to offer a review of Innovative Marine’s new full size Ghost Skimmer.

A little disclaimer, as this skimmer is meant to be used with Innovative Marine’s SR line of all in one aquariums. I don’t own one of the SR series of aquariums, so I am running this skimmer on a standard reef tank, within a 30 gallon sump.

The Ghost skimmer doesn’t look like much, as most of the bells and whistles are tucked away behind a white plastic body. It sort of looks like the old original iPod, got together with a CPR backpack skimmer, and had an illegitimate child. This sleek and simple design, allows for true drop in convenience. You literally set the skimmer into your aquarium filtration chamber or sump, adjust the water level, collection cup, and plug it in.

Innovative Marine packed a few nice features, into such a simple skimmer. First, the Ghost has a recirculating design that passively recirculates bubbles, resulting in a longer dwell time. Also, an enlarged air silencer is hidden, tucked away behind the white exterior. A bubble plate diffuser rests above the skimmer pump, reducing turbulence within the skimmer, which results in stable, efficient skim mate production. The pump itself is suspended within the skimmer, creating a low vibration environment within, making the unit run quieter. To produce a dense flurry of bubbles, Innovative Marine included a needle wheel impeller on the Ghost’s pump. The final feature worth noting, is the airline management system, which creates one simple exposed piece of airline up the skimmer’s side, which is pre-cut and fits in without the risk of kinking. All in all, Innovative Marine has done a nice job of packing a fair amount of features, into a sleek skimmer, that even a novice aquarist will easily be able to use. 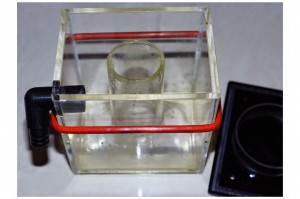 Since the Ghost doesn’t have an adjustment for internal water level, the water level of the sump or aquarium, factors greatly on how the skimmer performs. For aquarists like me, using the skimmer on a tank with a sump, this can create a problem. There are many reasons why one might be hesitant to raise, or reduce, the water level within their sump. Considering I found the Ghost performed best, with a water height of 12”, this becomes a water level that must be consistent, for the skimmer to operate at full potential. Water evaporation does cause that level to fluctuate, and those fluctuations will be noticeable when gauging the Ghost’s skimmer performance. If you use an auto top off, that doesn’t re-fill you tank often, allowing a measurable water loss before re-filling, you will probably experience some performance problems with the Ghost. If you manually re-fill your tank daily, or keep the water level in the sump consistent, then likely skimming performance will stay strong. 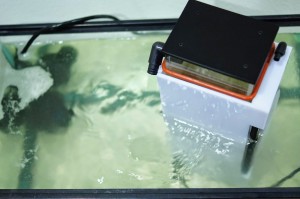 Another thing an aquarist is going to be quick to notice, is that the full size Ghost model does not allow for air intake adjustment. If you’re used to fine tuning your protein skimmer, dialing down the amount of air which can be pulled in by the pump, the Ghost offers only a fixed size tube, which draws air into the skimmer.

On day to day operation, the Ghost actually performs pretty well. It takes about one week, give or take, for the skimmer to break in. Once it does, (given that you don’t experience large water height fluctuation) the system creates a nice, thick and frothy foam, which results in a constant collection of dark skim mate. I wouldn’t say the skimmer is a super skimmer, nor would I say that it’s weak. Since I’m used to running skimmers on the wet side of dry, I am used to collection cups filling often. With the Ghost, I found it to produce a moderate amount of skim mate, and a light amount when the water level slightly dipped.

A few other features worth making mention of, are an integrated drain in the collection cup, which skim mate can use to escape into a large bucket or auto waste collector. The Ghost also sports a nice build quality, it doesn’t feel cheap, and it’s relatively quiet when compared to other, more powerful skimmers. 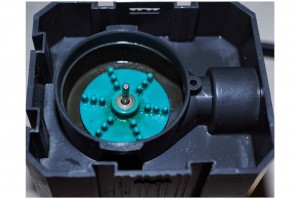 If you are keeping an Innovative Marine all in one tank, where skimmer space is a premium, and the ability to add a powerful, high performance skimmer doesn’t exist, the Ghost certainly beats many of the nano-skimmers or hang on back skimmers, currently on the market. If you’re a reef keeper in the same vein as I, that likes the ability to make changes and add monstrous equipment, you will simply be disappointed with the limitations behind the Ghost. Also, if you are savvy about modding all in one tanks, I think some simple changes would allow you to add some of Tunze’s smaller skimmers, which quite frankly are a better bang for the buck.

From a pricing standpoint, the Ghost full size retails for $ 299.99, while a Skimz Oval internal sump skimmer, that has all of the features the Ghost lacks, including a digitally controlled pump, is only about $ 100.00 more. If you have the space, I would opt for a more powerful skimmer, and even if you’re limited, I would do some research before plunking down that much capital, on such a limited protein skimmer. There are so many skimmers on the market today, so when one debuts for a decent price tag, with a host of limitations, it’s always worth looking around before opening your wallet.

Overall: May be the best option, if you are short on skimmer space. Otherwise, shop around before shelling out the $ 299.99 asking price, as better alternatives exist in the current market.