It was just last week that I shared the story of the Pygmy Jawfish, an undescribed species of dwarf Opistognathus with some truly spectacular mating colors. And, wouldn’t you know it, right after I posted that I happened to stumbled upon a couple of high quality videos of this beautiful little fish in the wild. 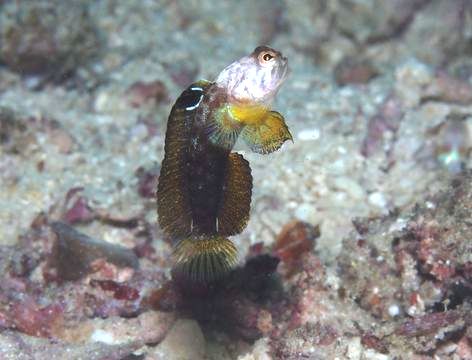 These short clips were filmed at Triton Bay, a region of West Papua just south of the well-known biodiversity hotspots of the Raja Ampats and Birdshead Peninsula. There’s no word on exactly what depth this was filmed at or what the habitat was like, but based on some of the other creatures filmed alongside this specimen—Nursalim Flasherwrasse (Paracheilinus nursalim), Magenta Dottyback (Pictichromis cf porphyrea), Redspot Dartfish (Ptereleotris rubrstigma)—it seems likely this was a moderately deep sand/rubble area.

Only one other image showing this fish in sexual display is known, and this specimen from Triton Bay can be seen to differ in having a less overtly yellow hue to its fins and sides. Likely, this varies from specimen to specimen, perhaps with the intensity of this coloration correlating with its desirability by the females. But, even with the more subdued colors, the stark contrast of its white head against the black body makes for a highly attractive piscine, particularly when combined with its sultry mating dance. I don’t know about you, but that flared operculum… the jerky movements… the effortless hovering… it’s enough to get any serious fish nerd a little hot and bothered. 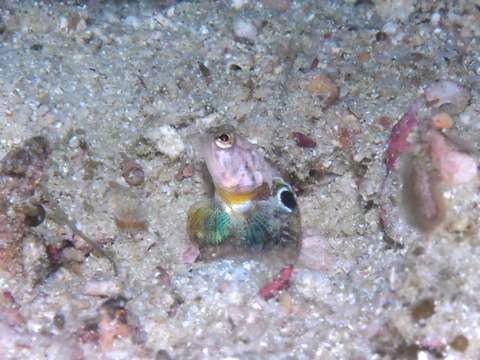 A male Pygmy Jawfish (opistognathus sp. 4) from Triton Bay. This specimen is not showing the intensified colors of the sexual display. Credit: mdX2 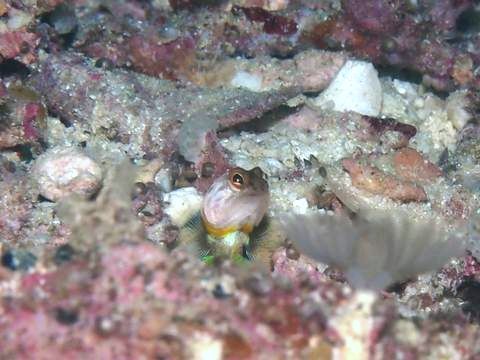 This is likely the same specimen as above. Note the prominant yellow operculum and the black ocellus in the dorsal fin. Credit: mdX2