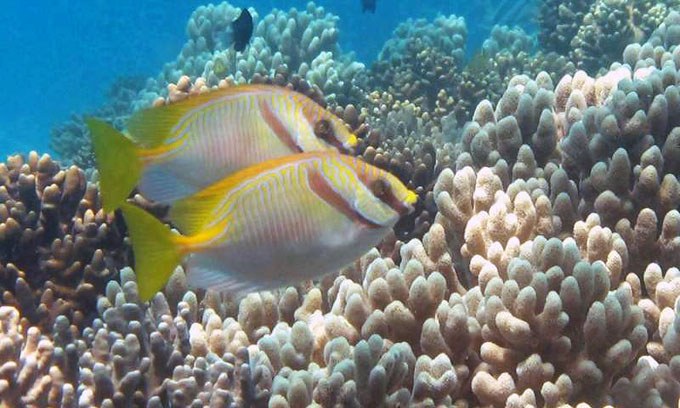 
This is a relevant research we previously reported.  Reef fish may pair up simply to act as spotters for their companion.  When you see two fish swimming together, it’s not safe to always assume they’re mated pairs.

The following article was provided by the the University of Technology Syndey:

New UTS research confirms that, when it comes to rabbitfish couples, appearances can be deceptive, raising fundamental questions about pairing, reproduction and social systems.

The study investigated the nature of the mating system of a pairing species of tropical marine fish (the pencil-streaked rabbitfish Siganus doliatus) – showing for the first time that adult pairs may not necessarily be mates after all. The results raise tantalising questions about the sex lives of this coral-dwelling reef fish.

“Rabbitfish are a very interesting group of fishes and are also an important part of the fisheries catch in many countries of the tropical and sub-tropical Indo-Pacific. About 50 per cent of rabbitfish species live in socially monogamous pairs, while the other half form loosely associated schools,” explains UTS marine ecologist, and lead author of the research, Dr Rebecca Fox.

“For the schooling species, it is a matter of record that they reproduce at mass spawning aggregations. But we have no scientifically-published records of the mating behaviour of pairing species of rabbitfish in the wild and so their reproductive habitats are still a bit of a mystery. We’ve tended to assume that, since they live in pairs, they would simply reproduce on their home territory with their partner,” she says.

In order to find out more about the reproductive behaviour of pairing rabbitfish and whether mating is the basis of pairing in these fishes, the research team tagged adult, pair-forming rabbitfish from the Great Barrier Reef with acoustic transmitters and tracked their movements over a six-month period.

“We were able to record for the first time that these fish actually undertake co-ordinated group migrations during the mating season, always around the time of the new moon. The results strongly suggest that the fish are migrating to a spawning aggregation site, some distance from their home territory, to breed,” Dr Fox says.

“This supports previous anecdotal reports of large aggregations of pairing rabbitfish at certain times of the year. But it also begs the question, why pair when you have access to mates at a regular reproductive gathering?”

The answer could lie in the way pairing species of rabbitfish feed, foraging in cracks and crevices in the reef means your vision can be restricted and having a partner who can act as your “look-out” may offer benefits in terms of protection from predators.

“Our findings add to a growing body of evidence for a non-reproductive basis for pairing in this fish family. More research is now needed to understand the mating behaviour of these pairs at aggregations such as whether individuals mate only with their partner, and what factors may have promoted a transition from living in schools to forming pairs in rabbitfish,” Dr Fox added.