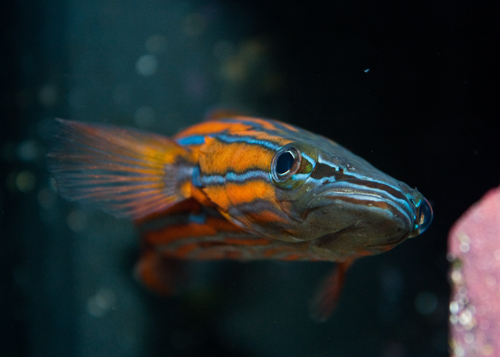 Although it’s too early to celebrate, I’m happy to report that progress is being made at the Suffolk County Community College Marine Science Lab, on the captive culture of one of the rarest and most valuable reef basslets in the world, Rainfordia opercularis.  Last year, with the help of Fluid Dynamics International, and by virtue of an anonymous donor, a mated pair of flathead perch was purchased and placed in our lab. Once the pair was introduced into their broodstock tank, spawning commenced within a few weeks. Throughout the spring semester and most of the summer, spawns of 50-1000 eggs were hatched regularly into our experimental rearing system, with little success beyond 7 days post hatch (dph).  However modifications to our egg handling techniques and feeding regime have resulted in considerable progress. 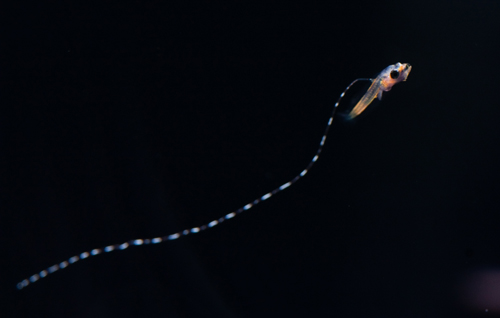 At this writing, the latest brood has reached an age of 17dph, with about 100 larvae remaining. Day 17 appears to be a bottleneck in development as this age is associated with high mortality and a major developmental milestone known as flexion. Flexion is the process by which the posterior end on the vertebral column curves upwards to become the upper lobe of the caudal fin. It is also marked by the development of fin rays and is often considered the midpoint in larval development. You can read more about the rearing techniques and other happenings in my lab, in my article, Back to Basslets, in the next issue of Reefs Magazine. I’ll also be discussing these details in my talk about the growing marine ornamentals scene on Long Island at MACNA in a few weeks. I’d like to point out that this latest milestone was only possible with the support of Algagen, ESV, Andy Rhyne at the RWU Aquaculture Lab, and Noel Heinsohn and Katie Marino at the Long Island Aquarium. Thanks guys!