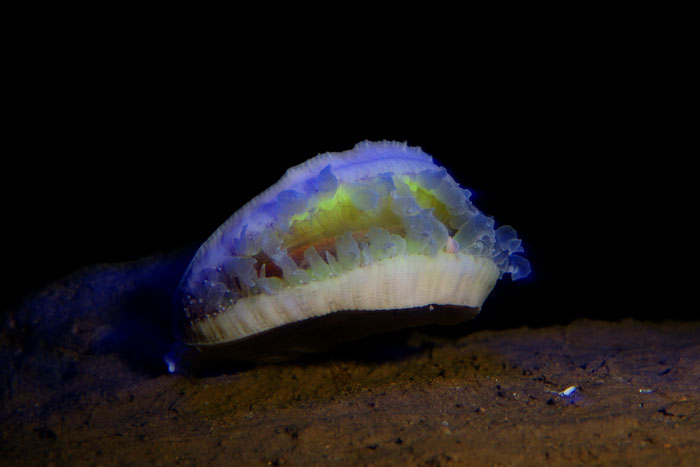 There are a few species this might be (pavoninum, magnificum, politum, angustum), and a skeleton would need to be examined to determine an identification. Whatever this is, very few images exist of it, but the green fluorescent oral disc makes this one easily recognizable. 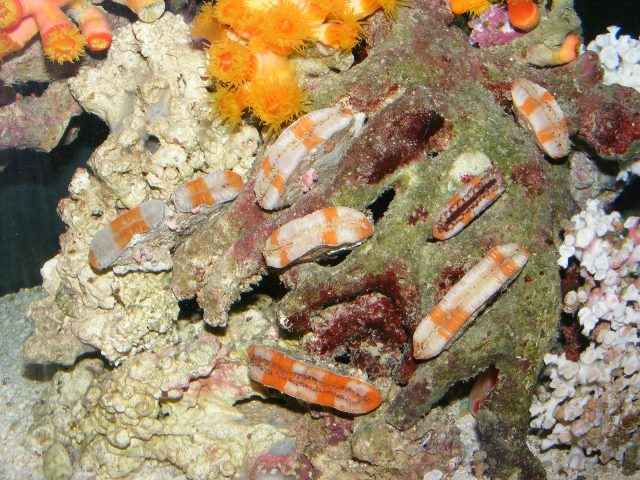 This distinctive species has been identified by some aquarists as Flabellum, but the flattened base of the skeleton is more in keeping with the similar Truncatoflabellum, as is the highly compressed shape. Of the species Cairns lists from the region, T. spheniscus seems to be the closest match, with other taxa being more rounded. No in situ photographs exist, so whether this is correct or not will remain a bit of a mystery. 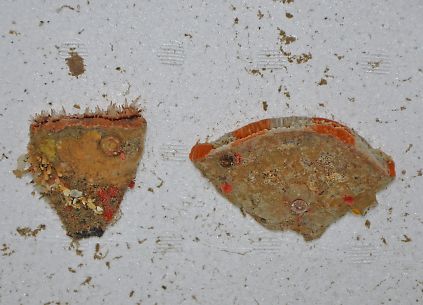 Both of these may be Truncatoflabellum, note the eponymous truncate bases. Credit: Sea Bros

This species is more commonly collected than most of the corals discussed thus far. I’ve never heard of it in the US, but specimens turn up in Japan and Singapore with apparent regularity. Whether these are being trawled by fishermen or hand-collected is unknown. It’s been found in water as shallow as 2m in Sumatra, which likely explains its relative industry abundance. It occurs to depths of at least 106m. 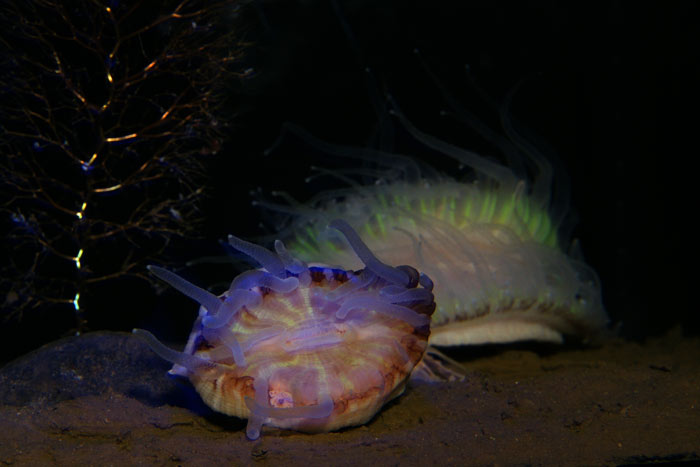 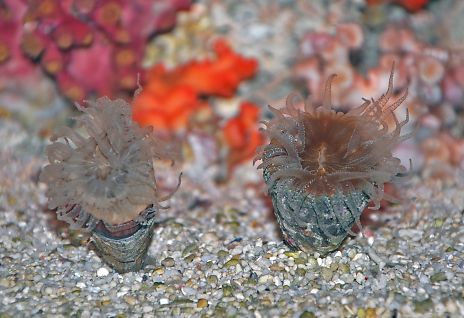 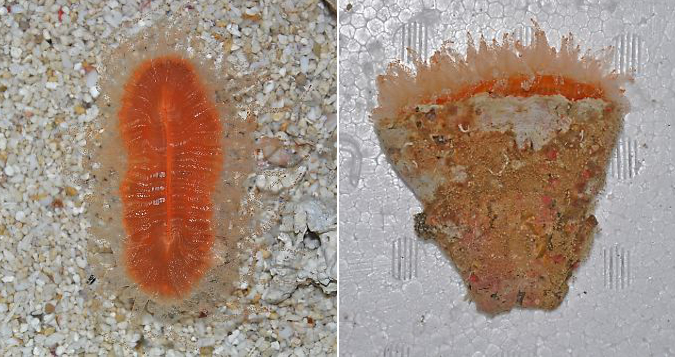 Madracis is a modestly diverse genus most closely related to common aquarium genera like Pocillopora, Seriatopora and Stylophora. Species vary from zooxanthellate to azooxanthellate, often depending on localized growing conditions. Encrusting or massive specimens occasionally find their way into aquarium exports as confusing oddballs. 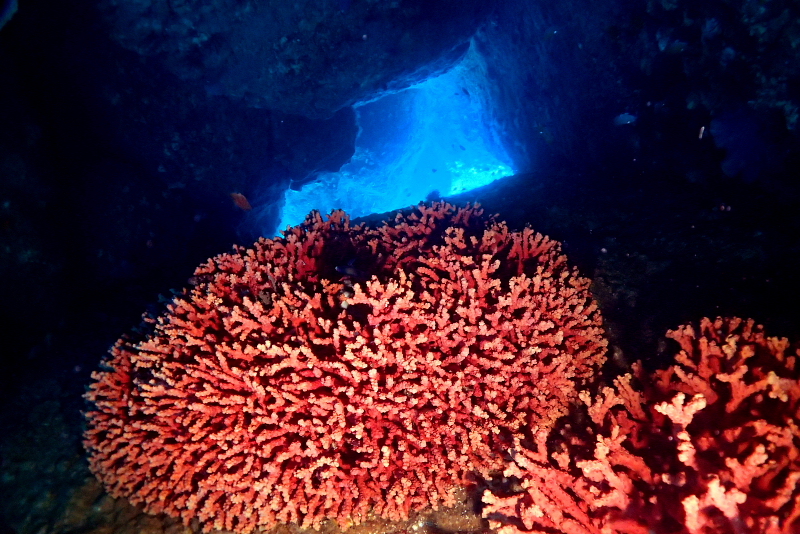 Madracis asanoi differs from more massive forms in having a finely arborescent skeleton. It is known only from Palau and Japan in depths greater than 50m, and it comes in browns, greens, and pinks (the latter being well-documented in Japan), often with white growth tips on each branch. The polyps also possess green fluorescent protein, making this a real head-turner of a coral for an azooxanthellate reef tank. 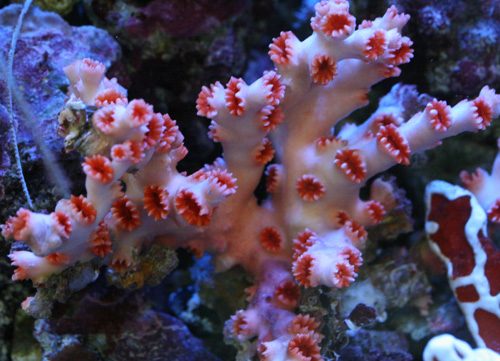 This branching coral was looked at by four of the preeminent azooxanthellate experts in the world, and none could confidently identify it. Such are the limitations of small, grainy photographs, but this specimen truly is remarkable. While the branching shape suggests Dendrophyllia (and this was the tentative consensus of the taxonomists), there are enough unusual features to leave this in doubt. Notice how the polyps are variably elongate, versus the more evenly round shape typical of Dendrophyllia. Notice the prominent (exsert) septa, another characteristic not usually associated with Dendrophyllia. And finally, the white coenosarc separating the polyps is highly different from the yellow or orange tissue we are familiar with in most other species.

It has also been suggested that this might be Sclerhelia, a poorly known species documented only from the depths surrounding St. Helena in the Atlantic. But this has been argued against by some. It could very well be a new and unknown genus, perhaps one endemic to Japan. What’s desperately needed is more material to properly study. Given that only this single photo seems to exist, this is likely a very rare species in the aquarium trade. This is a fantastic opportunity for the aquarium community to make a real contribution to scientific knowledge, so keep an eye out for this and any other strange azoox coral you may spot. 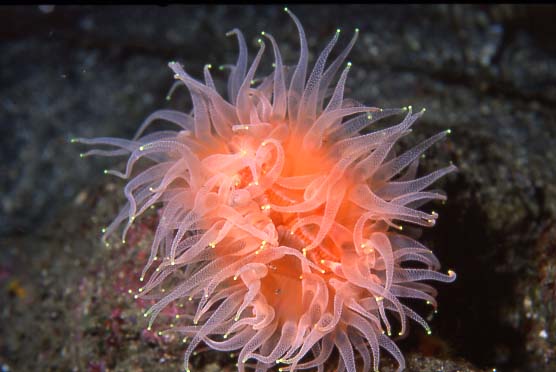