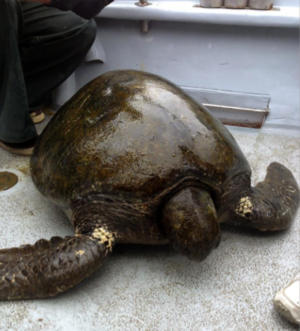 Unusual winds are causing record high temperatures along the West Coast, particularly off California’s Coast.Temperatures are currently 5 to 6 degrees warmer for this time of year, making it the warmest fall in about 30 years. A change in wind patterns, notably no winds blowing in from the north, are stopping the water from cooling down, as it normally would. An endangered sea turtle, normally only found in the warmer waters of Southern California, was found in San Francisco. Fisherman have noted seeing Hawaiian Ono and other warm water species. Whales common to the area have not been spotted and fisherman have noted the waters seem empty and salmon catches are down. Scientists speculate that the normal species will return once the water returns to its normal temperature. MORE