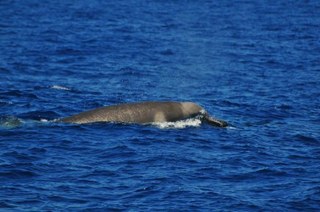 
The Shepherd’s Beaked Whale, Tasmacetus shepherdi, is a very secretive whale with only four confirmed at-sea sightings as of 2006. They can reach 20 feet in length and have a dolphin-like beak, with adult males having a set of tusks at the end of their lower jaw.

“I knew from a distance that it was something unusual, something rare” stated Natalie Schmitt, whale scientist.

“To encounter this group was amazing but the fact that they stayed at the surface for so long so that we could get many minutes of footage was unique. … I’ve never seen any other footage of Sheperd’s beaked whale” mentioned Dr. Michael Double during his interview with ABC News (below).