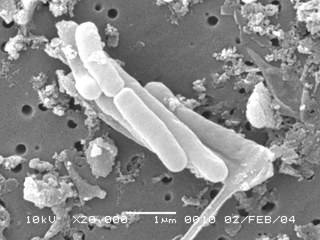 
Initially, she thought nothing of the scratch that she received while working with her freshwater aquarium.  However, once it became infected and would not stop oozing, her mother became concerned. Antibiotics proved ineffective in treating the wound, so she sought a diagnosis from a dermatologist.  In the end, it was discovered that her scratch was infected with a rare bacterial strain of  Mycobacterium marinum, also known as fish tank granuloma.

M. marinum is commonly found in both saltwater and freshwater aquariums. Strains that infect humans, though, are rare and are sometimes found in aquariums with fish infected with tuberculosis. While not contagious, M. marinum is particularly invasive, causing skin wounds, damage to deep tissue, and even bones. Doctors from both UCLA and Loma Linda Medical Center have performed two surgeries and have tried a myriad of antibiotics to combat the bacterial infection to no avail. It grows stronger and has now become drug-resistant.  A third surgery is planned to remove necrotic and contaminated tissue and to ascertain the extent of the infection.

She may soon lose her hand if the bacterial infection is not stopped.  This is just another reminder to be careful with the glass boxes we keep. Some general guidelines to follow to minimize infections like this would include wearing gloves while working in your tank, never working with with exposed cuts, and thoroughly washing with soap and water afterward.

Watch the news report for more information on how this infection has affected Hannele: