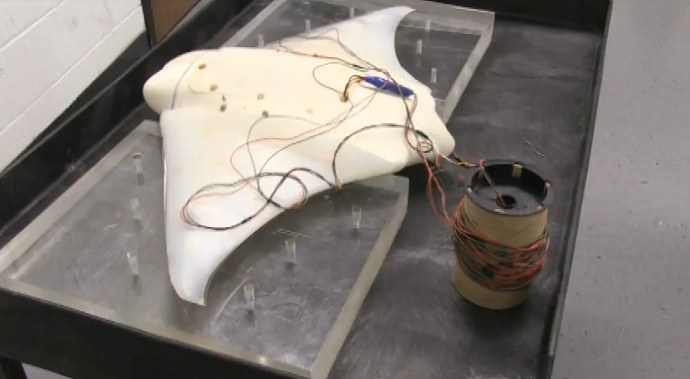 A cownosed ray at the California Academy of Sciences.

Contrary to what news sources are reporting, this underwater robot is not modeled after the manta ray as their quirky “Mantabot” name suggests. It’s actually modeled after the common wester Atlantic and Chesapeake Bay cownosed ray, Rhinoptera bonasus, pictured at right. Cownosed rays have a set of dental plates surrounding their mouths whereas manta rays have a set of paddle-like lobes extending in front of their mouths.

“Biology has solved the problem of locomotion with these animals, so we have to understand the mechanisms if we are going to not only copy how the animal swims, but possibly even to improve upon it,” said Hilary Bart-Smith. Bart-Smith is an associate professor of Mechanical and Aerospace Engineering at the University of Virginia’s School of Engineering and Applied Science where she and other researchers are working on this Navy-funded project.

Due to the versatile and highly maneuverable design of rays, underwater autonomous vehicles based on this design could have potential industrial and military applications ranging from covert surveillance to long-term collection of data for scientists.

The researchers spent time studying the rays’ movements in the wild, in the laboratory, and through dissection to better understand how the creatures effortlessly moved and turned.  Their initial prototype attempts to mimic those movements and their long-term goal is near silent propulsion with minimal energy input.  The current model is made out of plastic and houses a battery and electronics. The wings are made from silicone rubber and embedded within this flexible “skin” are rods and cables that, when given a specific command, will give the robot locomotion.

“We are studying a creature to understand how it is able to swim so beautifully, and we are hoping to improve upon it,” Bart-Smith said. “We are learning from nature, but we also are innovating; trying to move beyond emulation.”

Currently the robot is controlled from the surface through a computer interface “umbilical cord” that tells the robot which way to turn and how to flap its wings in order to move in specific ways. To turn in a given direction, scientists will stop one wing from flapping while the other one continues to flap. To go forward, both wings beat in unison.

The below interview with Hilary Bart-Smith goes into more detail about the project and shows the cow-nosed ray robot in action: