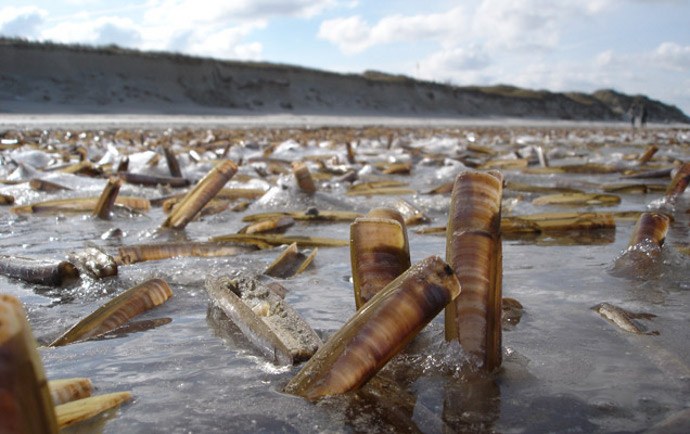 
Razor clams, Ensis spp., are an intertidal / subtidal clam that lives in the mud and sand. In addition to digging 30 inches into the sand, they can also dig at a rate of 0.5 inches per second. Obviously they have found a trick that allows their limited muscle capacity to dig into the sand both quickly and deeply.

Amos Winter, Robin Deits, and A. Hosoi believe they have figured out how the clams are burrowing so quickly and efficiently and they have published their findings in the Journal of Experimental Biology.

In order to understand how the clams were performing this feat, they had to replicate the clams’ intertidal zone sandbed. Winter ended up using transparent 1 mm soda lime glass granules in a tall, narrow container. He saturated this “sandbed” with natural saltwater and lit it with high intensity halogen lights in order to visualize the clam’s descent through the sand.

Using the information they learned from the clams’ burrowing characteristics, the researches have successfully built a machine that can burrow using this same trick. In the long term, Winter hopes to use this technique to build a self-contained robot that can burrow into and out of the ocean floor, which could have interesting implications for oil exploration and seafloor anchoring: