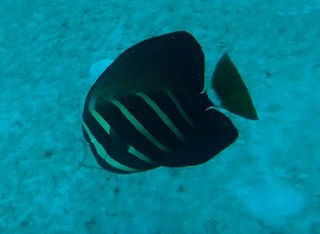 This Pacific sailfin tang was spotted in Atlantic waters.


The 28cm (11 inch) non-indigenous specimen was spotted swimming at the north end of the Boynton Beach Reef (Southeast Florida).  The USGS Nonindigenous Aquatic Species website states the pathway for the fish’s entry into Florida was via “released aquarium,” although it can not be determined if the fish was intentionally introduced into Atlantic waters or washed out into sea from acts of nature such as hurricanes.

Hobbyist must never dispose of any aquarium life (including substrates and water) into natural waterways.  This goes for both fresh and saltwater aquariums.  Aquarium owners who live close to coastlines should implement safeguards against accidental release of aquarium life into local waters during natural disasters such as floods, hurricanes, or earthquakes.  Non-indigenous, invasive species such as Indo-Pacific Lionfish introduced and prolifically breeding in the Caribbean are wreaking havoc on local ecosystems.  Do your part in protecting our natural habitats from invasive species.