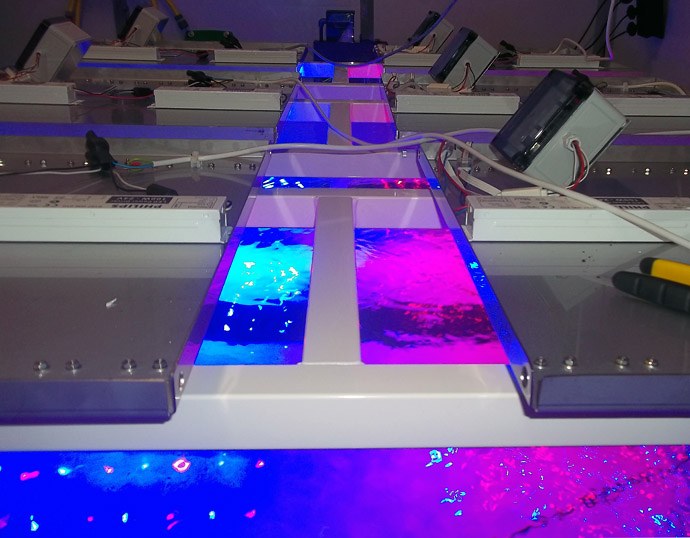 A bank of red and blue LEDs over the experimental aquarium. Photo courtesy of Tim Wijgerde.


Using Philips LED lights, the researchers investigated how the SPS coral Stylophora pistillata would respond to light with varying intensity of blue and red light.  Dr. Wijgerde, a regular Advanced Aquarist contributor, describes the finding of his research for us: “For zooxanthellae growth, blue and red are co-dominant, whereas for chlorophyll a synthesis, red light seems to be dominant over blue, inhibiting chlorophyll a production. This is logical, as within the first 10 meters red light is present. Thus, the coral seems to use red light to detect a high irradiance environment, reducing chlorophyll a, and thus photosynthetic efficiency, prevent light damage.”

In layman’s terms, the study reinforces the theory that corals use red light as their gauge for light intensity and regulates photosynthesis according to the amount of detected red light.  With the popularity of red LEDs used in many modern lighting fixtures, reefkeepers should be conscientious of how much red light they use over their aquariums in light of this research.  Note: red light is commonly found in proven lights such as Radium metal halides and numerous fluorescent bulbs as well as in wild reefs, so the idea is not that red light is necessarily harmful but that too much red light can have negative effects on how stony corals regulate photosynthesis.

The paper’s abstract (published in PLOS ONE) goes into more detail:

Light spectrum plays a key role in the biology of symbiotic corals, with blue light resulting in higher coral growth, zooxanthellae density, chlorophyll a content and photosynthesis rates as compared to red light. However, it is still unclear whether these physiological processes are blue-enhanced or red-repressed. This study investigated the individual and combined effects of blue and red light on the health, zooxanthellae density, photophysiology and colouration of the scleractinian coral Stylophora pistillata over 6 weeks. Coral fragments were exposed to blue, red, and combined 50/50% blue red light, at two irradiance levels (128 and 256 μmol m−2 s−1). Light spectrum affected the health/survival, zooxanthellae density, and NDVI (a proxy for chlorophyll a content) of S. pistillata. Blue light resulted in highest survival rates, whereas red light resulted in low survival at 256 μmol m−2 s−1. Blue light also resulted in higher zooxanthellae densities compared to red light at 256 μmol m−2 s−1, and a higher NDVI compared to red and combined blue red light. Overall, our results suggest that red light negatively affects the health, survival, symbiont density and NDVI of S. pistillata, with a dominance of red over blue light for NDVI.