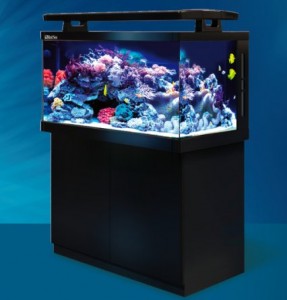 Red Sea is launching a new aquarium line dubbed the S-Series, and they are calling this the ultimate all in one aquarium system. They started with an aquarium that looks much like former ones, but that’s where the similatities end. The S-Series will come in 400, 500 and 650 liters and has some new features that will blow the old ones away.

For starters, the overflow system spans the entire back wall and no longer houses filtration in the back. Filtration is all handled by an included sump that sits down below in the cabinet. The overflow system is not only for getting the water to the sump though; it also houses closed loop style circulation pumps that remain hidden from sight but still put flow in all areas of the tank. Lighting has also received some nice upgrades and now consists of two four bulb T5 units front and rear as well as a two bulb unit with moonlights at center. That should make this tank perfect for any type of photosynthetic life one could wish for. The aquarium itself is made from low-iron glass for ultra clear viewing. The sump includes a skimmer and return which feeds the skimmer, display, chiller and any additional reactors you might want to add. This should keep things simple in the plumbing down below and keep excess heat from pumps out of the water. Just like their older models, the S-Series comes with a power center which combines all your electrical into one plug leading into a fuse box type of set-up. 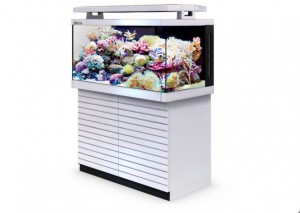