How to Reduce Aquarium Power Consumption

This is the first of a short series of articles aimed at improving our aquariums’ sustainability: we will start by illustrating several tips to reduce the energy bill of our tanks.

We hear more and more every day about sustainability, and we would like to present some tips on how to keep a sustainable marine aquarium.

In this article we will cover the topic of how to reduce the energy consumption of the aquarium. This is essential, as even a nanoreef tank uses more energy than most household appliances, as it is running 24/7. In the following weeks, we will examine additional environmental impacts of our tanks, as well as other conservation issues.

Unfortunately, in regards to aquarium sustainability, there is not a straightforward approach. Each decision and action has consequences, and thinking about every little thing is almost impossible. The lack of a simple measurement unit to help us quantify “sustainability” also helps tangle things up. 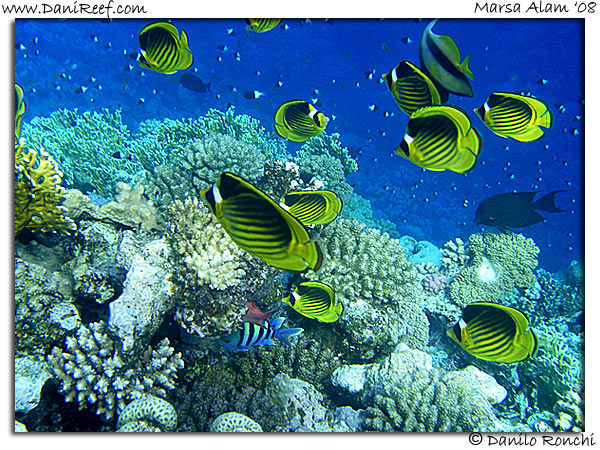 The tropical reef tank needs some electrical components in order to function. These are unavoidable and will always add to the total energy consumption (at least for now and the foreseeable future). In the basic set up of a rather small aquarium, we will find lighting, pumps, skimmer, return pumps, water top-off systems, and systems for heating or chilling water. Occasionally, we also have calcium reactors (or similar) and other facultative accessories.

We keep our lights on for around ten hours per day, for a total of several hundred watts. Lighting is definitely one of the most energy-consuming components, so we can make a big difference by acting on it. 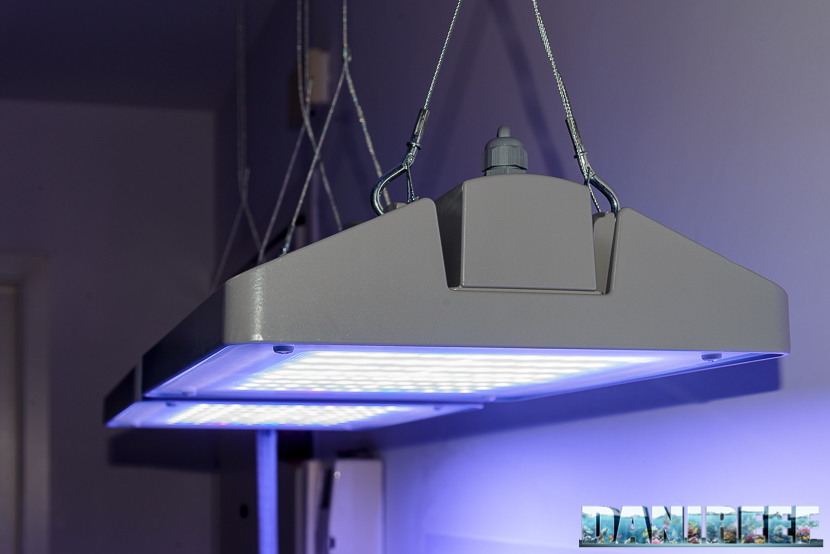 The Philips Coralcare (article) ceiling light uses about 190W. In a year, that’s around 700 kWh consumption.

Let’s use LED placing them correctly

The first tip is to use a LED lighting system. With these lamps we can obtain the same illumination power while minimizing the electrical consumption, compared to HQI or T5 lamps. We should also check that the light doesn’t go beyond the tank surface, lighting your house walls and floor. The small LED tunze Ecochic can even be placed underwater, to avoid the light loss by reflection on the water surface.

If we see that our lamps are lighting the outside of the tank, or their beams are wider than we need them to be, we could change the lenses to tighter ones (at 90° or even 60°) or we can move the light closer to the water surface. A few trials might be needed to find the perfect balance between having the whole tank lit up and no light outside of it. If our illumination is not uniform, we should place our most demanding corals right under the main beam and other corals on the sides for an optimal solution. 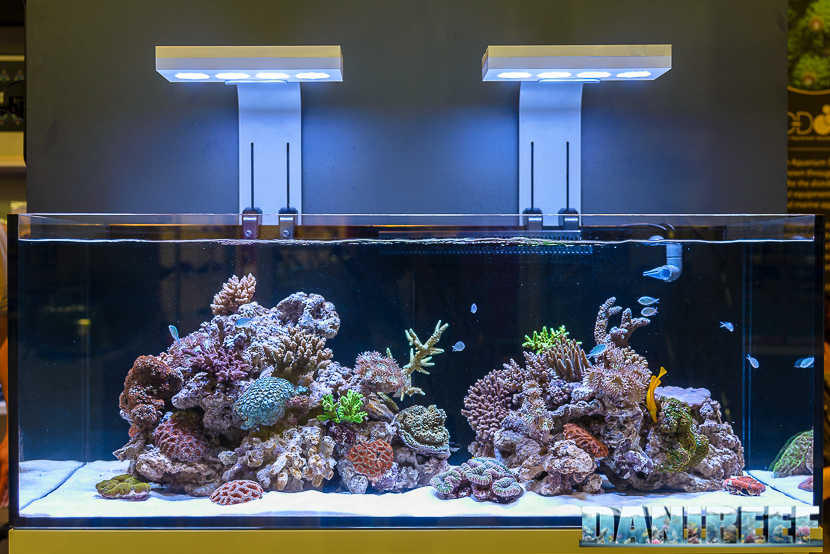 Choosing the right lights for the tank’s inhabitants

Almost all LED lights are adjustable. We can increase or decrease their lighting intensity, and sometimes, we can even separate different color channels. Thanks to this feature we can try (slowly and patiently) to get the best lighting plan for our corals and their growth, while also optimizing the energy consumption. We need to think about what type of corals we are keeping: for soft corals and anemones the light demand is not that high!

For example, my LED light uses around 35W for a 100L tank (80x30x40), this would obviously not be enough for SPS corals, but soft ones such as Zoanthus and Sarcophyton would thrive. 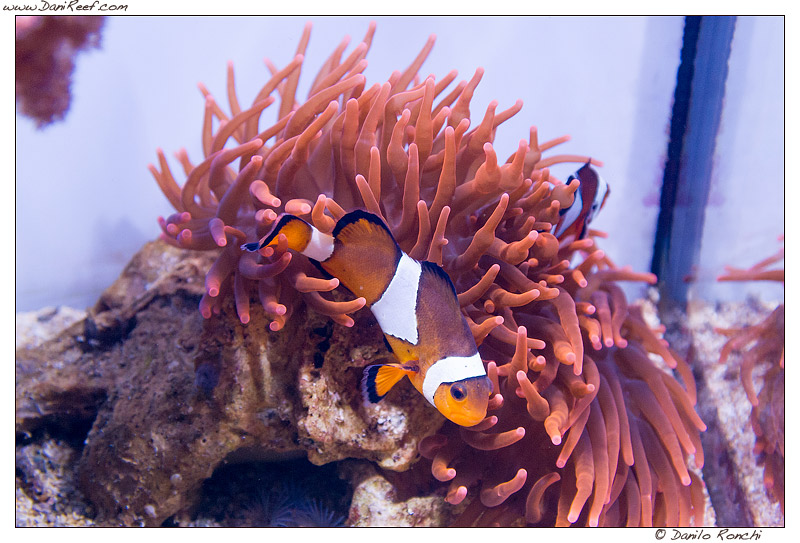 Moreover, my anemone Entacmaea quadricolor has always been in good health and it even grew enough to divide itself. If we have easy corals, we can easily avoid the high-energy consuming lighting system that would be needed for SPS corals.

The sun lights up our Earth well enough to grow corals in tropical seas, even at depths where its light doesn’t arrive at full power. In Europe we don’t get the same sun strength as in the tropics, but our tanks are limited enough in depth to compensate. In full sun days, the sun’s power is calculated to be 700W per square meter. A big tank could reach those dimensions; a nanoreef like mine is about a quarter of a square meter. On sunny days, a properly-placed tank could function with the lights off, fueled only by sunlight. 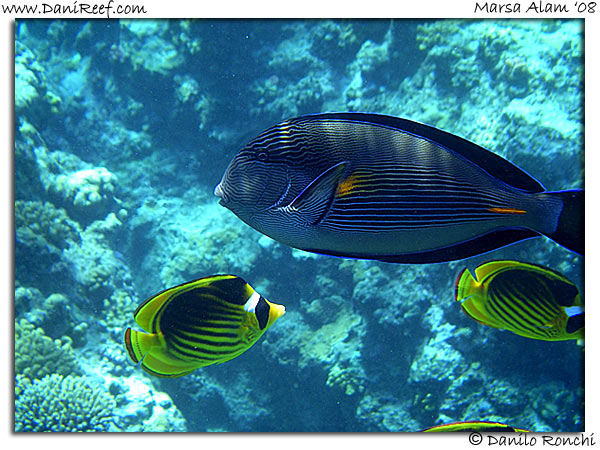 If we consider the sun’s lighting power of 1400 kWh per square meter (average value in Italy according to solargis.info) and we place the tank where it could be lit by the sun for half the time, we would be saving a total of 700 kWh, which corresponds to 200 W per 10 hours a day for the whole year, for a one square meter surface tank.

This means that if we normally light up our one square meter tank with a 300 W LED light, and if we use the sunlight to switch on our light only when needed most (or adjusting the light when the sun is not very strong), we could ideally use up only a third of the initial electrical energy. Of course, this is an ideal scenario which would be obtainable only by using a sensor able to regulate our lamps based on the sun, and by having our tank placed in a optimal position.

It’s technically possible to light the tank solely with a rotating mirror system to maximize sun light, but this is almost Sci-fi

Why does 1W of sun correspond to 1W of LED light*?.

We need to consider that solar irradiance is made up of infrared and ultraviolet rays. What we actually call “light” is only 41% of the total radiation. A LED light which uses up 1 W will actually emit 0.3 W (for the Philips CoralCare, the efficiency is 31.4%) 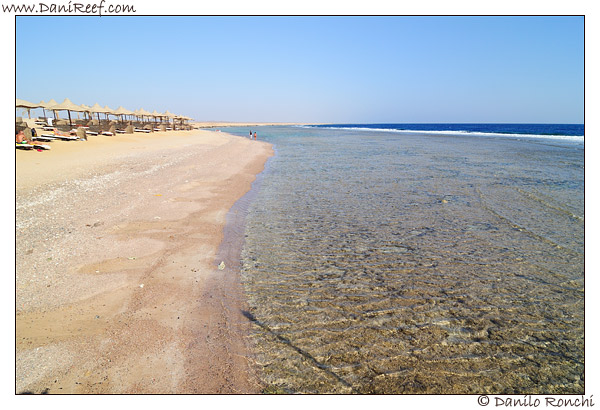 The sun emits a maximum of 1,000 W per square meter and 100,000 lux, thus around 100 lumen/w. Typical aquarium LED lamps emit 50 lumen per Watt (in the Philips CoralCare case), and 88 lumen/W in the case of the white tunze Ecochic.

The value rises with white lights, as LUX values are higher for lights similar to the sun. The same amount of light has more LUX for green than for other colors.

A blue-skewed light will have a very low lumen value, even if it has a high power or elevated PAR.

In the most extreme case, an ultraviolet LED not visible to our eye has 0 lumen, even though it is still radiating electromagnetic waves (light). If you’re interested you can read more about it here. Unfortunately, corals do not perceive light as we do and they are not concerned about the lumen quantity.

Water movements is definitely necessary. By buying efficient pumps and always keeping them clean, we can reduce the watt consumption while maintaining the same water flow. If we allow our pumps to stay dirty and full of algae they won’t be able to push as much water, and we might end up buying more powerful ones which we actually don’t need. Placing them in the right spots will also help optimize their performance. 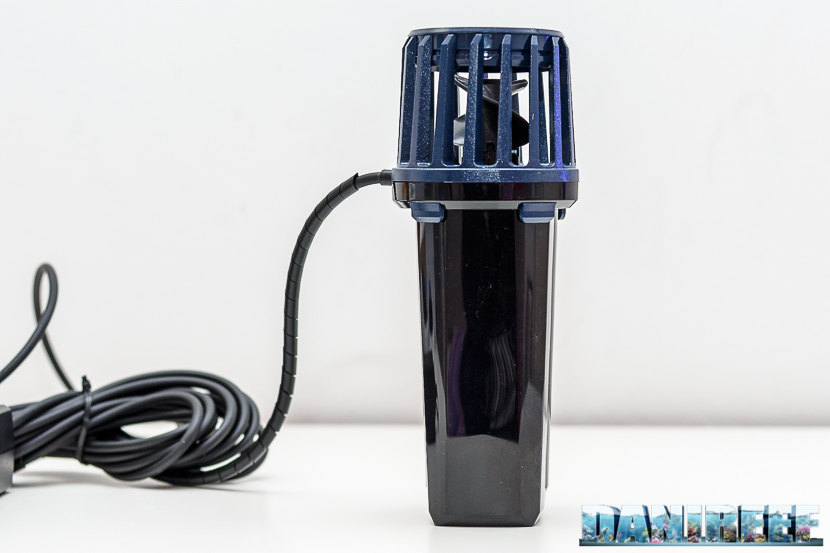 A skimmer with a high water output and a partitioned sump can help maximize the water treated in relation to the the water volume that the return pump is moving. To maximize its performance, we could choose a smaller return pump and still get the same filtration quality. This means that the water exchange between tank and sump will be reduced. We already talked a lot about it here. 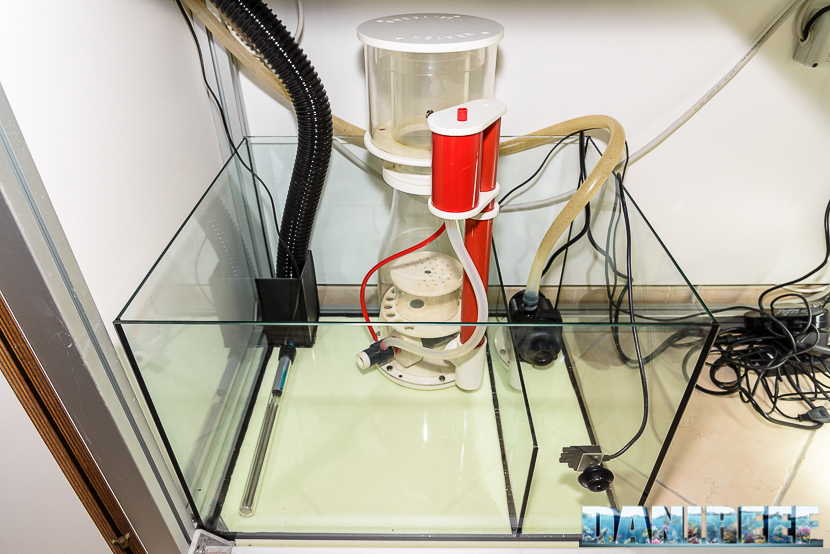 divided sump
The height gap between the tank and sump is also relevant: with a shorter gap, the return pump will have to work less in order to move the same amount of water. For example, a sump positioned next to the tank would allow us to use a much smaller pump and to make maintenance tasks much easier (your back will thank you for it!) still, we realize that it could take up too much space and also not the best looking solution, you get to choose if it’s worth it! Let’s remember that in any case, we must have some sort of level gap between the two, as the water has to spontaneously flow into the sump.

Do you remember the Lumaz project in a garage, with the sump at the same level of the tank? Look it up here. 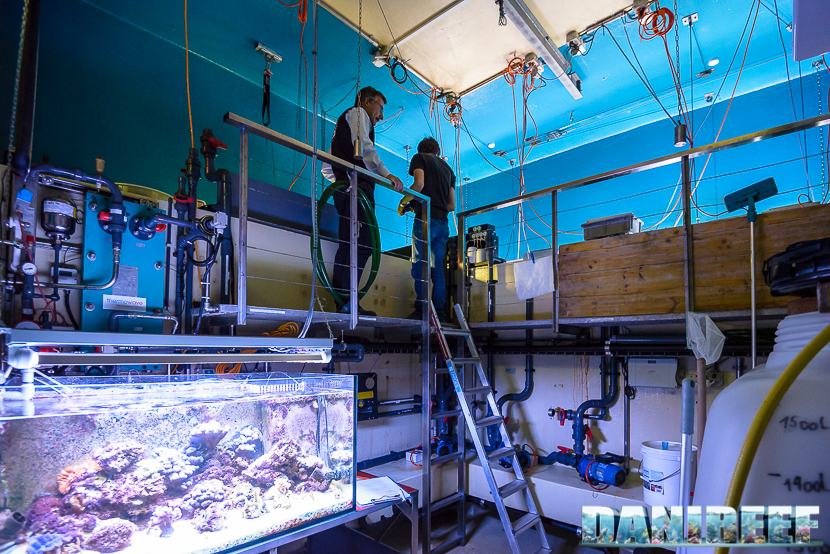 The aquarium “sump” at the Zurich zoo is placed at almost the same height of the main tank.

A skimmer that is kept clean also performs better than a dirty one. If we keep our skimmer running at top efficiency, we could even use a smaller and cheaper model, while having the same performance of a less cared for bigger skimmer. Here you can find a guide to skimmer maintenance.

In the sump we also find the automatic water top-off system, which is not very energy-demanding. We could still avoid its use altogether by placing the top-off water tank above the sump, and using a sensor and a valve to make it start running when needed. Once the valve opens, the water will just fall into the sump without the need of a pump. 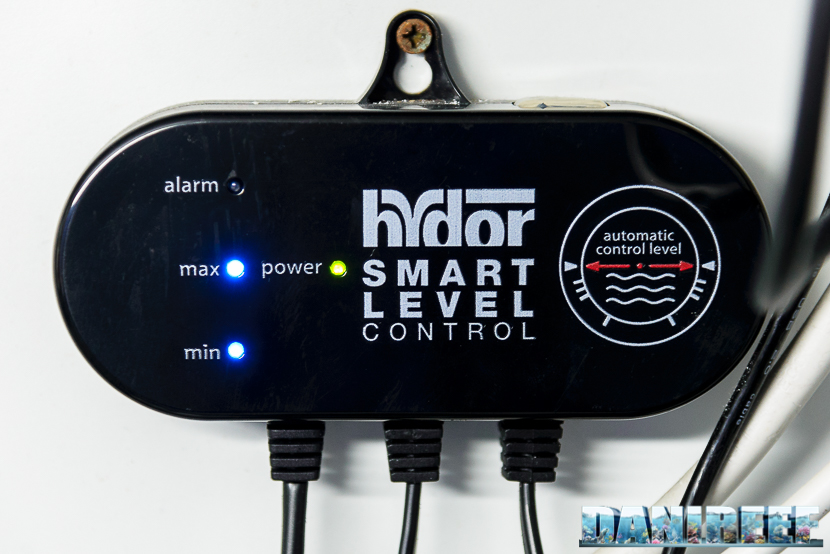 Marine animals are very sensitive to temperature changes. In the tank we need to create a stable environment with only a few degrees difference (2 – 3 °C) between summer and winter. It’s also possible to keep a slightlydifferent but stable temperature: for example, if our house is particularly cold, we can carefully get our animals used to lower temperatures (24-26 °C). This way we can limit the work of the heater during winter months, but we will then need to chill the tank to those temperatures during summer. This type of solution could be ideal for those who keep the tank in a basement, or in any colder rooms. 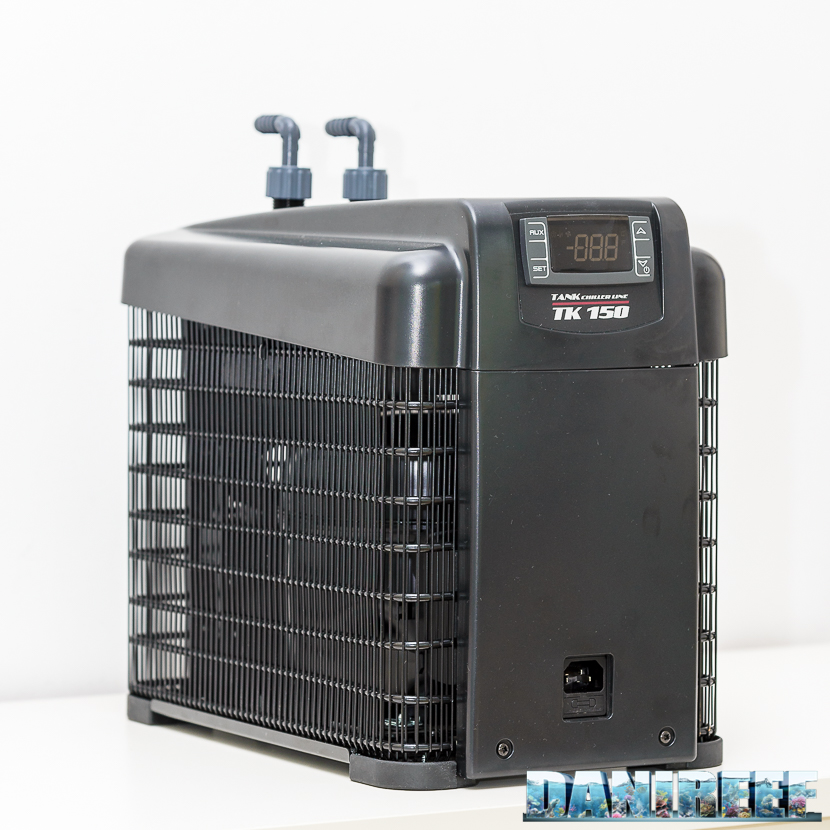 If instead our main energy consumption comes from a chiller during the summer months, we could keep the tank at a higher average water temperature during the year ( 27-29 °C). Unfortunately there is not a strict rule for this situation and we would need to try out more than one solution (by measuring the heater and chiller consumption) to obtain our preferred temperature.

Remember that we should never exceed 30 °C, as many animals would not be able to adapt to such high temperatures.

To save electrical energy we should think about what devices use it the most, and try to optimize their use. Sunlight could even replace (partially) our tank ceiling lights, while for other equipment, the best trick is to set them at their optimal performance and keep them clean and efficient. Try to balance everything, relating it to what you are keeping in your tank: oversizing things usually means wasting energy, and this is not necessary.

Do you have any other ideas or suggestions?