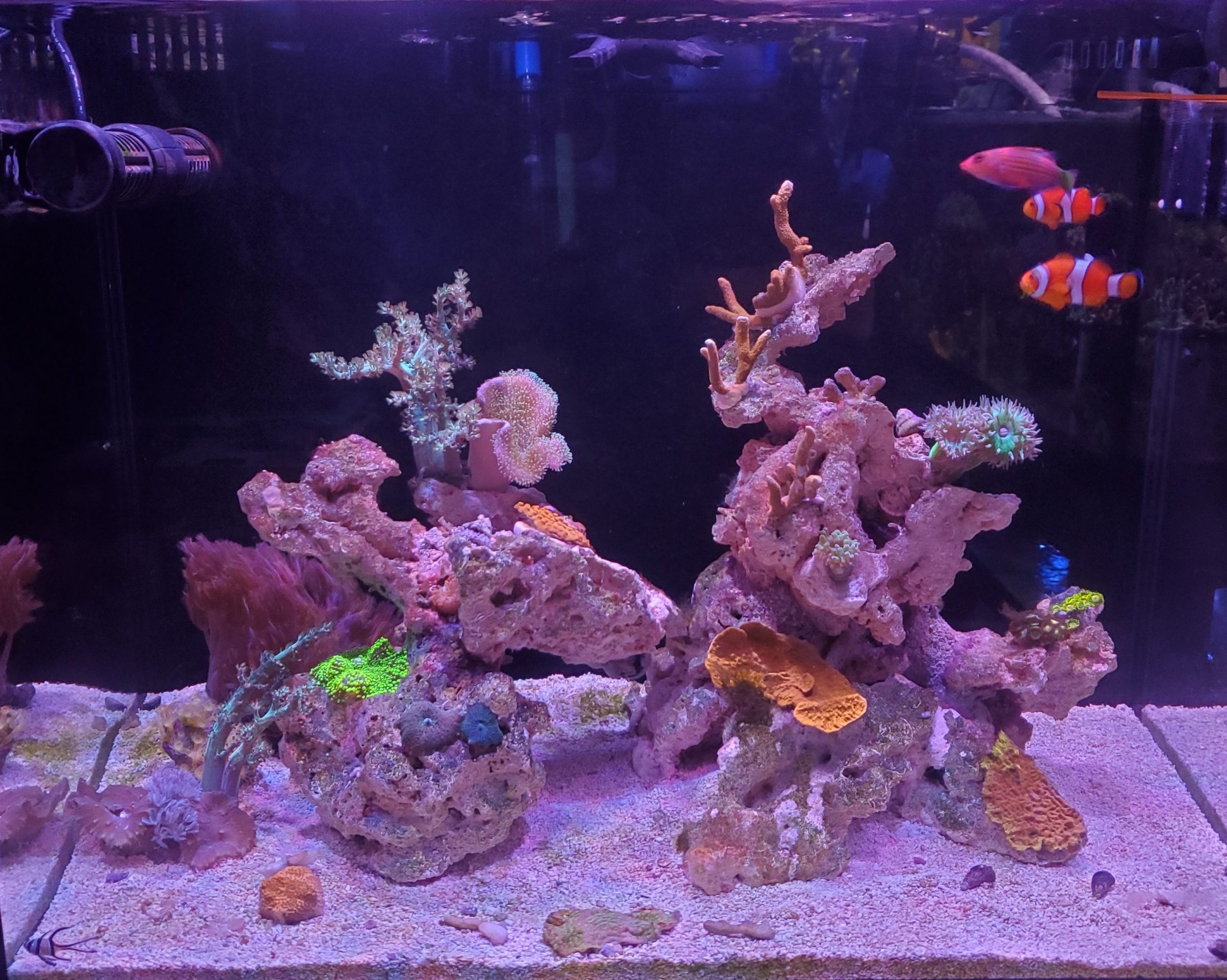 Preface: This Reef Mentoring article series is to document my recommendations to a hobbyist I have been mentoring. I am basically building a reef tank with his setup at my house and maintaining it for a year with weekly hands on sessions.

It has now been approximately 2 months since installing the Reef Mentoring Project system in my house. The  water has been in the tank for just a little over 1 month and he steps I have taken up to this point have resulted positively with a very minor “ugly” phase that has since resolved itself. I outlined some of the routine tasks that I have done to get the results I’ve seen thus far. Here goes the realistic 2 month tank update.

The basic targets are monitored daily, water chemistry is tested weekly, and adjustments are made to flatten the curve.

Feed sparingly with pellets and frozen foods. During this time, perform a livestock inventory to be sure everything is accounted for.

Most of the livestock has been doing fine except for the Montipora digitata, since the nitrates have been testing very low either manually or automatically via my Reef Kinetics Reefbot V1. In order to compensate without increasing phosphates, I started dosing some sodium nitrate. It has been a struggle to get any reading off the test kit manually or automatically, and I may have to double check with another batch of reagents or test kit just in case. It may be accurate since the API Nitrate Test kits are not known to have good resolution.  Though the only sense of comfort is that looking at the color it is not bright yellow.

The two water changes performed have been water from my main system which does read between 3-5ppm so it is being consumed fairly quickly. This had definitely impacted some of the test Montipora digitata frags I added; they showed symptoms of slow tissue necrosis (STN) at their bases where I glued them. I also had to remove the mentee’s LPS corals (NY Knicks Torch, Acid Hammer, and Candy Cane) back into my system to recover since they were starting to recede.  Knowing the symptoms and having another tank to transfer them to was key in all of them recovering.

With the lower nutrient levels, I also brought the system metabolism down with lower light intensity but am maintaining the 12 hour photoperiod.

It has been a challenge to fine tune the kalkwasser (calcium hydroxide) reactor/doser since you cannot make large corrections. It also requires time for the system to settle on those changes made in such a small water volume.

So far we’ve experienced 3 fish losses. The first was the tail spot blenny somehow jumping through the only opening in the screen top. The neon goby just disappeared completely one day with no corpse inside nor outside the tank. Recently the royal gramma mysteriously died with no indicators of poor health since it was eating well each day. It’s unfortunate but stuff like this happens in the hobby. The difficulty is attempting to understand and explain when everything else in the tank looks fine and the parameters are in check. Over reaction from aquarists has been one of the main issues which cause even more harm to the system.

Clean Up Crew and Other Additions:

To counter some of the usual “ugly” maladies in the early months, I slowly introduced a few extra “Clean Up Crew Members.”  This consisted of 5 Astraea snails, 1 conch, and 1 tiger tails sea cucumber.  I also added some additional hardier corals: (CC Cherry Blossom Montipora, Ultra 24K Leptoseris, Neon Green Leptoseris, Zoanthids (Gorilla Nipples, Rastas), Youngs Finger Leather, and a baby rose bubble tip anemone.  As long as the nitrates are truly not 0ppm these seem to be doing fine.

The one fish I did add was one of my baby Banggai cardinalfish, which I bred in my main system. I wanted to maintain an internal source of nitrates to compensate for the current low scenario.

Everything experienced thus far is what I expected. Sure, any type of loss of life is undesirable, but when you are trying to create an artificial ecosystem, many uncontrollable variables will impact it. We will probably just maintain the four fish bioload for now and let the system continue to mature. Once the remaining LPS (Duncans and Frogspawn) show growth I will slowly bring the torch, hammer, and candy-cane corals back in and see if the lighting PAR can be increased a bit. 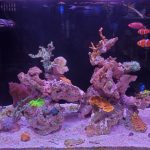 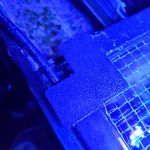