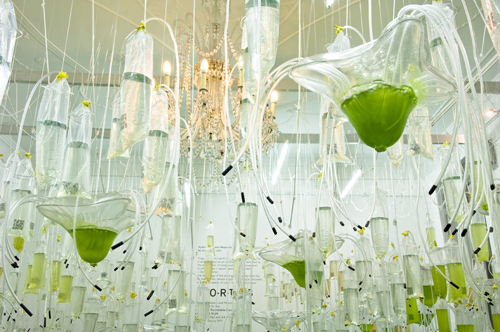 We talk a lot about how corals and reef life find their way into modern art exhibits, but this is a first.  The image above is taken from H.O.R.T.U.S., a prototype of urban gardening which was on display at the Architectural Association earlier this year.  The exhibit combined bags of algae and bioluminescent bacteria, and fostered interaction by encouraging guests to contribute CO2 from their breathe to the algae, which is converted to oxygen which is consumed by the bacteria.   This article on the Huffington Post details several new exciting displays that make use of algae, including a water cooled PC which substitutes algae for water, allowing the algae to make use of the elevated temperatures from the computer.  Be sure to check out all of the cool exhibits including the Algae Opera and Algaculture, which hints at a future where we ourselves are symbiotic with our tiny green friends.