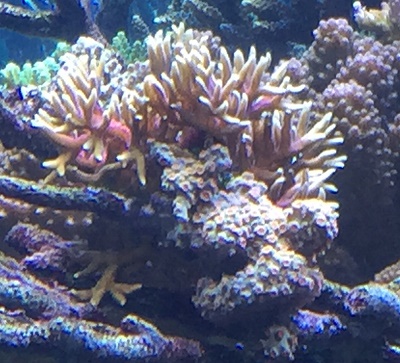 There are some long-term coral partnerships that unfailingly work out time and again, while other coral closely placed together don’t get along at all. Finding relationships that work can be tricky – place the wrong coral together and they will compete and fight, sometimes to the death. Throughout my career in this industry, I have spent hours grafting and fusing different coral in my care, and I am particularly intrigued by the art of long-term commensalism among various and often distantly-related coral species.

One of my favorite pairings to date is between the classic Burger’s Birdsnest and the Meteor Shower Cyphastrea. For the most part,I have grown them on a small scale, and I keep separate mother colonies, which I then frag out to use in combos. Occasionally, I even get a chance to see some of those coral creations planted in Joe Yaiullo’s massive reef tank, placed by him during one of his dives. 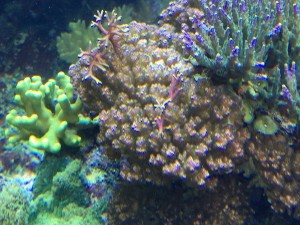 a shot from Joe’s tank

It’s great to see these two coral get along so well, even over the long term and on a larger-sized scale. Joe himself is not afraid to push the limits in his reef, always to great effect.

This weekend, at MACNA 2015, we’ll have the perfect opportunity to see how different vendors stock their displays, and how closely together they situate their different coral varieties.