That old, vaguely familiar weather buzzword has been floating around the media in sensationalized fashion for many of the months thus far in 2014: El Niño. 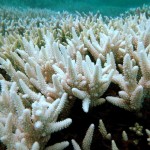 Following the 1997/1998 El Niño, the World Ocean experienced the worst case of mass coral bleaching ever historically documented. A full 16% of all coral reefs on Earth were not just bleached, but “severely” bleached1. As of today, 17 years later, we have yet to see another significant event. Students matriculating to their senior year of high school have never seen a strong El Niño wreak global havoc on issues ranging from weather, to animals natural history, to entire regional economies.

Schematic of normal versus El Niño conditions in the Pacific.

So with that in mind, we take a step back: What is El Niño? Under normal circumstances, and in simplified terms, The sun shines down on the tropical Pacific, and the tradewinds blow from east to west, piling up warm water that has absorbed all that sunlight energy high and deep, literally, around the Maritime Continent in the west2. Low atmospheric surface pressure and thunderstorms that go high into the atmosphere produce tremendous amounts of rainfall in the west, as the tradewinds have also evaporated large amounts of moisture on their journey. Once air has risen through those tall thunderstorms and arrives high in the atmosphere, and having released its moisture, moves east and sinks near South America. Dry and cool, it can now repeat the cycle of evaporating moisture and pushing warm water west. This “closed loop” is known as the Pacific Walker Circulation, named for Sir Gilbert Walker, the physicist regarded as discovering the atmospheric pressure patterns in the Pacific.

The mixed layer in the East is comparatively very thin, with cooler waters much closer to the surface, and little rainfall. Tradewinds upwell deeper, cool waters from below the thermocline: the steep temperature gradient between the upper mixed layer and cooler deeper layers. This upwelling takes place off the west coast of South America and along the equator. The Bjerknes Feedback, named for its discoverer, Norwegian meteorologist Jacob Bjerknes, follows: the cooling in the eastern tropical Pacific and equatorial central Pacific couples with and reinforces the above described Walker Circulation.

Through some set of circumstances, bursts of westerly winds in the earlier parts of the calendar year and into the northern hemisphere summer can interrupt and outright sabotage the tradewinds’ efforts of keeping all that warm water stacked up in the west. As a result, the warm water begins an eastward progression in the form of huge waves. If conditions continue to develop along this course, the west Pacific cools, and the central equatorial and eastern tropical Pacific lose their upwelled supply of cool water, warming significantly. Climate scientists monitor development and strength of an El Niño in part by tracking sea surface temperature (SST) anomalies at a center of action for this warming, an area of the central and eastern Pacific referred to as NINO 3.4. The thunderstorms from the west move out to the center of the Pacific, and this reorganized El Niño state intensifies and remains present throughout the northern hemisphere winter into the following spring with jarring global impacts: El Niño is a part of the most intense form of year-to-year climate variability on Earth.

Regions where SST anomalies are monitored to track the progress of El Niño, including NINO 3.4

What causes an El Niño? In the starkest terms possible: we don’t know. We have trouble predicting the onset or strength of a developing event. Even once El Niño conditions initiate and begin to evolve, they can cease abruptly without us having a superlative grasp on “why?”. Hence, El Niño remains the focus of concentrated scientific exploration.

So why have you been hearing about it this year? In early Spring of 2014, there were multiple instances of sustained tradewind slackening. This allowed waves of that warm water reserve in the west to move to the east, pushing the cooler waters below down and making the surface waters much warmer than they would normally be. This is part of the feedback mentioned above. Things got exciting. Scientists around the world began holding their breath3. Headlines of the strongest El Niño since, well, maybe ever, raced around the world at the speed of the internet. Then, in the summer, these wind bursts and massive warm water waves abruptly ceased. Why? Good question. Perhaps it has to do with the fact that the west Pacific has remained extremely warm, warmer than average, at the surface through the northern hemisphere summer. So, despite the redistribution of all this heat to the east, the west may not have cooled enough to stabilize the feedback that reinforces the El Niño pattern. However, as of the end of August, a new one of these huge warm waves has made the journey eastward and is beginning to warm surface waters further in the eastern equatorial Pacific, so the game is still afoot, with little agreement in forecasts4…

The International Research Institute for Climate and Society documents the spread of forecasts for NINO 3.4 SST anomalies. Warmer temperatures in the northern hemisphere winter months mean a stronger forecasted El Niño. There remains a large spread in predictions for the 2014-2015 winter.

Why should you care? All that heat, normally piled up and stored, is unleashed on the broader surface of the Pacific during an El Niño. The Indian Ocean, the Great Barrier Reef, the coral triangle, the beating heart of coral reef diversity on Earth in present geological time, and across the equatorial Pacific east of the Solomon Islands, can experience localized temperatures that are 2-5°C above normal for a given time of the year5. The result? Coral bleaching on an OCEANIC scale. Sometimes a particularly warm year in the Gulf of Mexico and Caribbean region can follow, allowing bleaching across multiple oceans. We know as coral aquarists that in general, corals can recover from bleaching, if conditions are not degraded. How much more coral reef has been too far degraded for post-bleaching recovery in the 17 years following the onset of the 1997 El Niño? Are we about to see a critical, unprecedented blow that furthers the decline of global coral reef health? Time will tell.

Further resources, supporting literature, and reading for the purposes of staying up to date on El Niño: