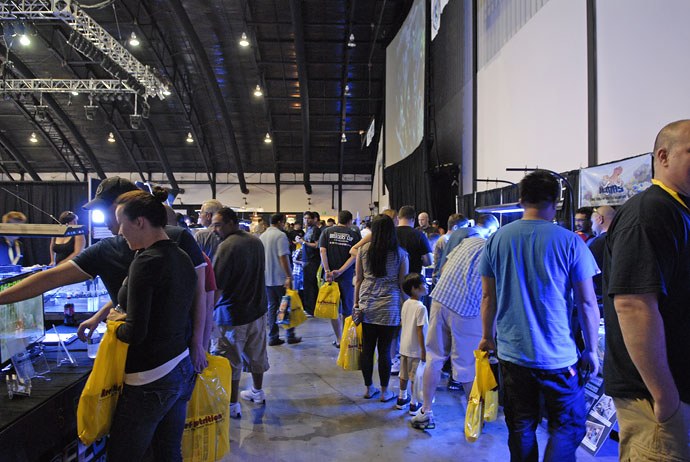 Enthusiastic aquarists as far as the eye can see!


Reef-A-Palooza is hosted by the Southern California Marine Aquarium Society (SCMAS).  Greg Carroll, president of SCMAS, confirmed with Advanced Aquarist the first day of RAP brought in over 2,000 aquarists.  2010’s RAP attracted 3,400+ attendees, and 2011 is on pace to exceed last year’s attendance!

Advanced Aquarist will post more detailed product blogs in the coming days.  In the meanwhile, enjoy a whole bunch of photos of RAP 2011.

Reef-A-Palooza is held in the massive “The Hangar” building at the Orange County Fair Grounds.  On the left is a mobile exhibition hosted by The Aquarium of the Pacific (Long Beach, CA).

Walking through the main hangar doors, attendees are greeted by exhibitor after exhibitor.

In addition to the scheduled speakers, RAP presented regular live demonstrations on its center stage.  As you can see, these performances drew healthy crowds.

Marine Depot was amongst the 70+ exhibitors.  Marine Depot’s prize wheel proved to be a big hit once again, consistently drawing lines 20-deep from RAP’s opening to closing.

Frags, anyone?  Many top-shelf live-stock vendors exhibited their gorgeous selection of Acros, Acans, Chalices, and more.

More frags for sale (these by Exoticfrags.us).  The amount and quality of aquacultured corals at RAP was impressive. There were too many look-down bins like this for me to report on, and pictures certainly do not do these corals justice.

As with all recent marine aquarium events, LED lighting (such as this slim unit from Acan Lighting) was literally everywhere.  I estimate over half of all booths had at least one LED light.  Aqua Illumination, Aquatic Life, CAD Lighting, Ecotech Marine, Ecoxotic, Orphek, Sun Brite, Wave Point, etc. were all on display.

Exhibitors showcased their wide array of aquarium merchandise.  Here is the beautiful new packaging for Warner Marine’s line of additives.

Reef Nutrition is a mainstay and supporter of every major marine aquarium event, and RAP is no exception.  Here, they display their Reef Nutrition alongside their new APB line of foods.

Brett Raymer of Animal Planet’s TV show ‘Tanked’ glad-hands a fan.  Brett is scheduled to speak about his show on Sunday, October 23 at 11am.

Sunday is Reef-A-Palooza 2011’s final day.  I strongly encourage Southern Californian aquarists to attend.  $10 tickets are available at the door.