This month, the Canadian Parks and Wilderness Society (CPAWS) and Nuytco Research mounted the first submarine expedition to the glass sponge reefs found in Georgia Strait off of Vancouver, Canada. Researchers have discovered a seafloor oasis made of hundreds of glass sponges—animals once thought to exist only as fossils! 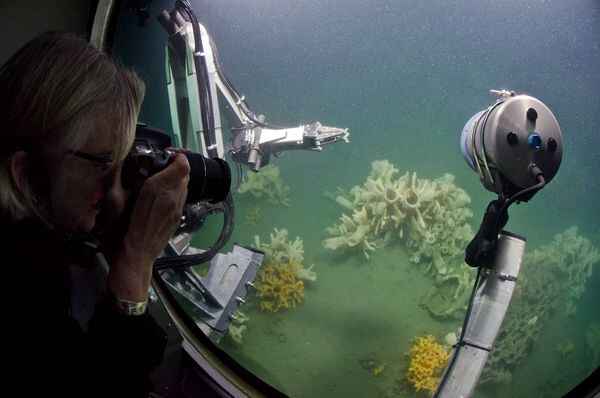 A submersible dive into Howe Sound in British Columbia reveals a colony of glass sponges.

Glass sponges are found across the globe. But only along British Columbia’s continental shelf do they grow over the skeletons of their dead ancestors to form massive deepwater reefs. For decades, scientists knew glass sponge reefs only as Mesozoic-era fossils from about 160 million years ago. But in 1986, oceanographers conducting a geophysical survey in British Columbia’s noticed an “acoustic anomaly” on their instruments. They had just stumbled on a 9,000-year-old glass sponge reef some eight stories high—a one-of-a-kind find.

Studying Marine Biology in Vancouver and working at the Vancouver Aquarium as a researcher, I was fortunate to have seen similar sponge reefs first hand. Sadly, the sponge reefs in southern British Columbia’s Georgia Strait currently do not have any protection and are at risk  by fishing activities putting them at risk of being irreparably damaged.  Read more here