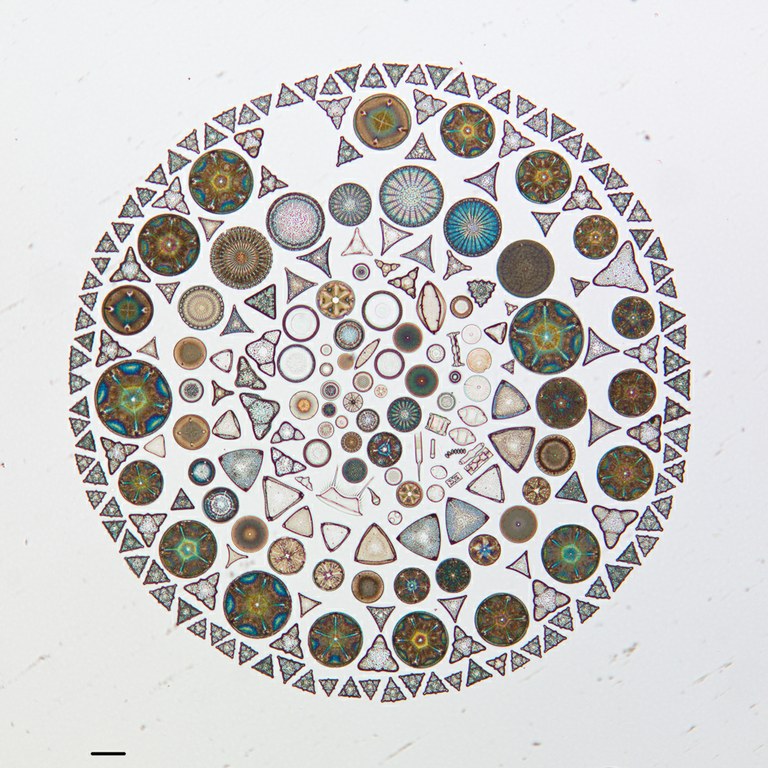 Diatoms are single-celled algae that take many intricate shapes. The Pseudo-nitzschia multiseries used in the study are simple rods that carry out photosynthesis throughout the world’s oceans.California Academy of Sciences / Flickr

A glass of seawater is teeming with life, and a recent expedition revealed more about what ocean water contains. Microscopic creatures in the world’s oceans weigh more than all of the fish in the sea and produce about half of the Earth’s oxygen.

Yet the ecology of marine microbes, which are crucial for everything from absorbing carbon dioxide from the air to regulating the productivity of major fisheries, are only beginning to be understood.

In a step to understanding this hidden world, University of Washington oceanographers have found that diatoms — the intricately patterned single-celled algae that exist throughout the world’s oceans — grow faster in the presence of bacteria that release a growth hormone known to benefit land plants. The study, published online May 27 in Nature, uses genetic and molecular tools to discover what controls marine ecosystems.

Armbrust co-authored the companion commentary to the recent special section of Science on the Tara Oceans expedition, describing the work as “a vivid, potentially transformative view of the genetic diversity and interconnectivity of these unseen marine communities.”

Armbrust’s research group has long studied diatoms, which are microscopic algae that carry out one fifth of the planet’s photosynthesis, more than all the terrestrial rainforests combined. Lab members began this project by looking at which bacteria were found in all samples of Pseudo-nitzschia multiseries, a common coastal diatom collected from five places throughout the northern Pacific and Atlantic Oceans. Next they cured the water samples of all bacteria living in the seawater, and found that the diatoms did not reproduce as well.

Co-author Shady Amin, a former UW postdoctoral researcher now on the faculty at New York University Abu Dhabi, added the bacteria common to all five samples back one at a time. One type, Sulfitobacter, sped up the growth dramatically when added back at a high enough concentration.

The authors showed that these bacteria exchange material with the diatoms while in turn producing auxin, a well-known hormone made by microbes living around the roots of land plants.

“The back-and-forth exchange of materials between these tiny creatures resembles an ongoing dialogue between two living organisms that culminates in the production of auxin,” Amin said. “It was so fascinating that we wondered if we could see this behavior elsewhere.”

Next, researchers went to sea and adopted some high-tech tools. Having shown what happens in the lab, they collected other ocean samples and found the same growth hormone. Then they used new genetic techniques to detect the activity of marine microbes — famously difficult to raise in captivity — that would never survive the transition to the lab. The same interaction was taking place, especially along coasts, but between different organisms that cannot be transferred to the lab.

“We’re just at a place as a field where we recognize that there may be very specific interactions between marine microbes,” Armbrust said. “Don’t ask me how many comparable interactions are out there. I have no idea. I can only imagine that there’s lots. And we’ve grabbed one of them.”

She predicts that more such interactions will help to explain how ocean waters become or stay productive, or how the base of the marine food web might shift in a changing climate.

“A lot of the high-powered tools that look at the function of individual cells were developed in the medical world,” Armbrust said. “Now that we can apply them to the ocean, we are starting to pull the curtains back on how this hidden world works.”

The research was funded by the National Science Foundation and the Gordon and Betty Moore Foundation.