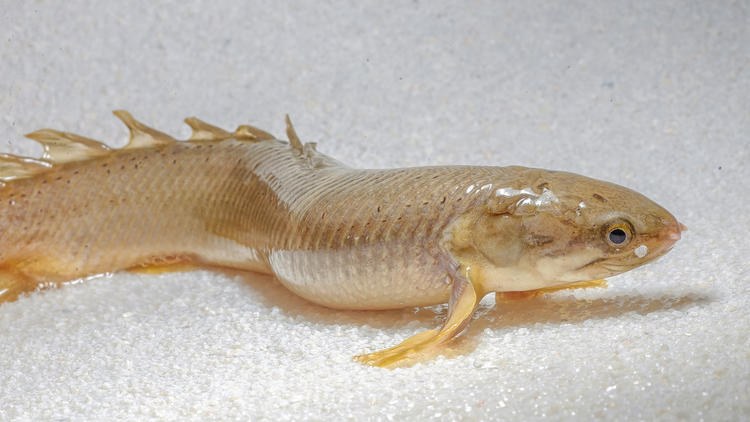 One of the land-dwelling bichirs. Photo by Antoine Morin


When we imagine evolution, most of us picture a fish taking its first steps out of water to become a land-dwelling tetropod.  Of course, this major evolutionary step didn’t happen so quickly, but researchers at the University of Ottowa appeared to have taken this idea to heart by teaching birchirs to walk on land.  In the process, the birchirs are teaching us a lot about how aquatic life may have transitioned onto land.

First thing’s first.  For anyone who doesn’t know what birchirs are, they are just about the coolest fish on earth.  They look like prehistoric dinosaur fish with pronounced armored scales, crazy archaic fins, and a head that looks more like a lizard than a fish.  In fact, the jaws of birchirs more closely resemble tetrapods (four-limbed vertebrates like amphibians, lizards, birds, and mammals) than they do fish jaws.

What’s more, in addition to gills, bichirs also breath air via a pair of primitive ventral lungs!  It’s little surprise the researchers concentrated their efforts on bichirs (specifically Polypterus senegalus) because of their ability to live out-of-water.  This unique order of fish is as close to the “missing link” as any extant species.

100 bichirs were reared in tanks with only a couple millimeters of water; Constant misting was used to keep their skins moist.  50 other control bichirs were reared in tanks fully filled with water, an environment more akin to their natural habitat; bichirs are found at the bottom of African rivers, swamps, and floodplains, coming up for a gasp of air when necessary.

The results?  Microevolution.  Over the course of eight months, all the bichirs raised above-water learned to “walk” (though waddle or slither better describes their movement) much more effectively than their underwater brethren.  The land-dwelling bichirs learned to walk with much less slippage and much better balance and leverage by moving with their fins closer to their bodies while raising their heads higher.

Moreover, researchers documented remarkable anatomical differences developing between the two groups.  The land-dwelling bichirs grew slightly longer shoulder blades that began to resemble those of stem tetrapods.  They also developed bones that resembled the beginnings of an extended neck that is common on terrestrial creatures but absent in aquatic life.

While the observed behavioral and physiological changes were regarded as minor, keep in mind that all this occurred within just eight short months!  Researchers hope to study multiple generations of bichirs raised on land to shed light on the seminal evolutionary process.

And yes, bichirs are tropical and regularly kept in aquariums.  See below: