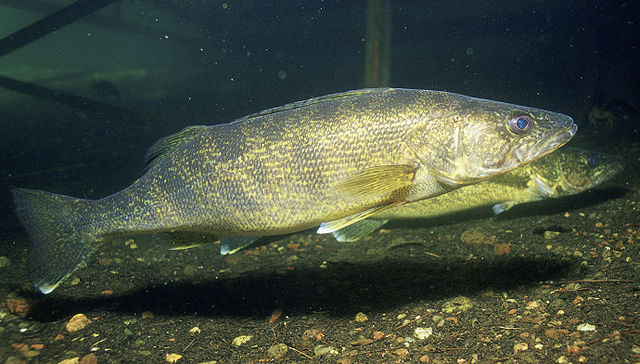 The walleye or walleyed pike (Sander vitreus) is a perciform fish species that can be found in freshwater lakes and rivers across Canada and the northern United States. Thought they are better known for their taste than their color (for those you who haven’t tried them, they are delicious), they are not an entirely unattractive species. While walleye tend to be a shiny golden yellow in hue, both “yellow” and “blue” color morphs are known.

Most of the color observed in fishes is produced by specialized, pigment-containing cells called chromatophores. Blue coloration in fishes, especially that produced by pigments, is fairly rare (blues seen in fishes tend to be produced by reflection rather than absorption). However, a very unusual blue pigment, sandercyanin (roughly meaning “blue walleye protein”), has been identified as at least one source of the walleye’s bluish form. This novel bili-binding compound is not contained in chromatorphores, but rather in its slime coat on the dorsal region of the fish’s body. Sandercyanin is supplied by secretory cells in the animal’s skin.

A group of researchers based in the University of Wisconsin have found that sandercyanin is present (in similar concentrations) in both blue and yellow morph walleyes. As it turns out, it is actually a lack of yellow pigment that is responsible for the cerulean appearance of blue morph specimens.

Season does appear to be a factor in the production of sandercyanin. Investigators now speculate that the pigment may play a part in countershading and/or photoprotection, though specific functions remain a mystery.