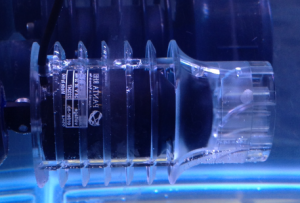 Take one look at the Panta Rhei Hydro-Wizard and it’s clear you’re dealing with something different. Pick up the hydro-wizard and the controller and the units feel as different as they look. This certainly isn’t a bad thing, the Panta Rhei pump wreaks quality from the time you open the box. From the dense packing foam (similar to what is found on a Parrot drone) on up to the unique design of the controller, it’s clear to see that Panta Rhei has truly “finished” this product. The pump’s guts are encased in high-quality acrylic and the entire thing looks and feels as though whomever constructed it methodically implemented each detail. While as aquarists we might expect every product to have such a polished, quality finish – more often than not we are disappointed. 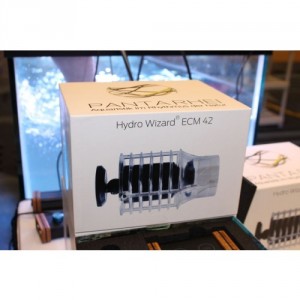 It’s sad but true, the reef aquarium hobby is plagued by sub-par products, poor performers and overpriced gimmicks. There are several strong contenders who release consistently good products, but once you step outside of that tier, quality takes a nose dive, along with performance and durability. Within seconds of removing the Panta Rhei pump, you notice a stark difference in finish which is certainly welcome among reef aquarium equipment.

Many aquarists are unfamiliar with German company Panta Rhei and it’s understandable. Usually Panta Rhei is building powerful water movers for public aquariums, such as the 52,000 gallon per hour hydro-wizard ECM 75. In 2014 the company envisioned a new type of home aquarium circulation pump, which has become the hydro-wizard ECM 42, which is capable of moving 5,000 gallons per hour. As a fully adjustable pump, the ECM 42 offers a wide array of capabilities for aquariums of all sizes. A little research into Panta Rhei as a company makes it clear that they should know how to make a great water mover for home reefs, but as always, aquarists are mostly concerned with how the ECM 42 performs.

The ECM 42 doesn’t look like traditional circulation pumps. It’s not a simple propeller, though it’s not as strikingly “out of the box” as a Maxspect gyre either. The motor, along with everything else mounts in the aquarium, unlike Ecotech’s vortech which keeps the motor outside the tank. If electrical consumption is any indicator of heat, then it’s likely the ECM 42 runs cool, as it uses a scant 22 watts of power. In my tank, after running the ECM 42 I haven’t noticed even a slight increase in overall temperature. Instead of requiring aquarists to adjust a spacer to adapt to glass/acrylic thickness, the ECM 42 uses a powerful one-size fits all magnet. Since the pump’s motor isn’t relying on magnetism to spin, the ECM 42 can mount darn anywhere it can physically fit. I chose to mount mine in the middle of the rear overflow – giving it a bird’s eye position to move water throughout the whole tank.

Inside the clear acrylic is the pump’s guts, which aren’t unlike other powerful water movers. A propeller like piece spins quickly, and ramping the controller up or down increases or decreases spin speed. It’s the acrylic body that is interesting, as it appears to toss water through a host of channels. When watching the current within the tank, water literally goes everywhere and I was surprised such a small compact unit could literally put an end to dead spots in the tank. Cranked up much over the first three settings, the ECM 42 would be overly powerful for my 200 gallon reef, as it pushes water forward in a wide flow pattern and brings it back once it reaches a tank wall, scraping flow along the bottom and stirring up accumulated debris. In a totally bare bottom tank the ECM 42 would be invaluable at bringing waste and uneaten food into the water column so that the overflow can remove it.

Another interesting feature is a self-clean mode, which can be run automatically or set by the user. In this mode the propeller spins backwards, pulling water through the pump with powerful suction, cleaning both the propeller and acrylic housing of unwanted debris. The goal is to limit the amount of times the aquarist has to remove the pump for a thorough cleaning – allowing the aquarium water to act as a machine capable of cleaning the pump. It’s an innovative feature, and I wouldn’t be surprised if we start seeing it crop up on other pumps. 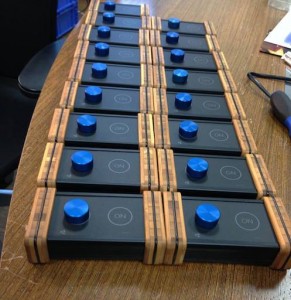 This is perhaps the most fascinating part of the EMC 42. The controller doesn’t look like anything else on the market, and the build quality is quite good, with a unique stylistic finish. The biggest departure from the ordinary is the magnetic button which controls all the pump’s features. If you want to turn the pump on, simply slide the magnet to on. To increase flow rate, or adjust the mode, simply turn the magnet clockwise or counter-clock wise to slow things down. Want the pump turned off? Simply slide the magnet to off. One interesting feature is the fact that the pump can be set and the magnet removed, making it impossible for anyone to fiddle with the setting. While not a game changer, this feature is handy for those of us with small children who like to fiddle with bright, shiny objects – or watch sand-beds erupt in a blast of water.

The ECM 42 can also be directly connected to a PC via USB, giving the aquarist a customizable and visual level of control over the pump and its various modes. I’ve yet to use this feature, and am not in any rush, giving that I found a nice flow setting using the magnetic controller. The ECM 42’s controller is surprisingly simple, leading me to believe that Panta Rhei seeks to design a circulation pump that is simple yet effective, without confusing the aquarist with a myriad of different modes.

Compared to other options:

To truly analyze the unit, it’s valuable to compare it to other devices, and the ECM 42’s most glaring competition is of course the Ecotech vortech MP40w. It’s important to say that while many aquarists probably consider the ECM 42 a pump within the range of the MP40w, it’s actually not. The ECM pump is far more powerful than an MP40w and it really competes head to head with Ecotech’s MP60w. Considering Panta Rhei’s price point of $ 625-675, it is practically neck and neck, pricewise, with an MP60w.

The ECM 42 is noticeably easier to set-up than a vortech pump. There is no need to fiddle with a bushing, adjusting it to the glass or acrylic thickness of your aquarium. The ECM 42’s magnet is strong, and since it doesn’t interfere with the pump’s motor, it can be mounted darn near anywhere. For example, I mounted the ECM 42 in the center of my back wall overflow, a feat impossible with a vortech as the pump’s motor would have been submerged in water. It was while installing the ECM 42 that I first noticed the flaw in Ecotech’s design, mounting the motor outside the tank and magnetically transferring power to the propeller. While it does keep the motor from generating heat within the tank, it limits mounting options considerably, especially in uniquely designed aquariums. Due to mounting alone, a tank like mine (48” wide, 24” tall and 36” left to right) requires two MP40w pumps for adequate flow, while one ECM 42 seems to work just fine. In that regard the Panta Rhei pump is a money saver.

The Vortech’s strengths though are readily apparent in the level of control an aquarist has from a wireless device. Using Ecosmart live a Vortech’s speed, mode and level of operation is quickly and easily adjusted. While I haven’t used Panta Rhei’s USB PC interface, from what I understand such a level of control is impossible with the ECM 42. You are either turning the magnetic dial, or hooking the pump into a PC. For now, this is a major set-back to the ECM 42, especially considering it costs more than an MP40w and as much as an MP60w. This gap in features and pricing makes the Panta Rhei pump an unrealistic option for aquarists with normal sized tanks, and really suits it well for aquarists whose tanks require a versatile mounting pump that pushes a lot of water.

An ECM 42 controlled by a vortech controller, remaining at the same price point would likely be a sensation in the marine aquarium world, and if Panta Rhei can design a wireless interface that functions well with their pump, they may have an overnight hit. I would say that for most applications, Ecotech retains its crown as the definition of the best performing circulation pump. That said, the Panta Rhei holds that title for certain applications, where versatile mounting and ease of operation are of special importance. 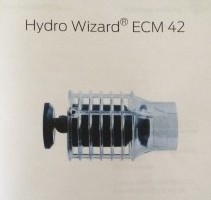 I don’t think current Vortech owners will be flocking out to replace their pumps with the ECM 42. However, I can see aquarists with uniquely designed tanks choosing the ECM 42 over a vortech, in applications that require simple mounting, with a wide range of options. Simplicity is where the ECM 42 shines, and you can have it out of the box and up and running, literally in minutes with very little need to toy with different modes to accomplish the right amount of circulation. The ECM 42 certainly could provide flow for a wide range of aquarium sizes, making it a lot of pump for $ 650.00.