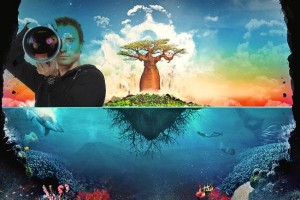 When I was attending the Eastern Academy of Scuba Education (EASE) in 2007, a little known film named Sharkwater had just been released in south Florida. Behind the film was a man named Rob Stewart, unknown to everyone at the academy, including the head instructors who had spent their entire lives traveling the world and diving. Since we were all avid divers and training to become instructors, one night a few of us set out to watch the film. We were all left in awe and the film changed my entire view of sharks and oceanic ecosystems. A few days later during a training dive, we spotted an 11 foot great hammerhead shark and suddenly I knew shark diving would be an important part of my future. It was after completing training at EASE, I began training under the now defunct Beautiful Ocean’s Academy in Montreal, as a coral reef biology instructor for divers.

Stewart, a Toronto native, had loved sharks since he was a kid. In fact he loved them so much, that he became a biologist and underwater photographer so he could learn more about them. After seeing the plight of sharks worldwide first hand, he scrounged enough money together to produce a film and nearly lost his life in the making. Sharkwater told the story of underground, illegal fisheries that were finning sharks and focused on groups around the world dedicated to stopping them. The film went on to win numerous awards and Stewart set off across the globe, taking the film and its message right to China.

A few years ago I heard that Stewart was working on a new film, tentatively titled Revolution. Yesterday, to celebrate Earth Day, Revolution was released in the United States and made available for download. 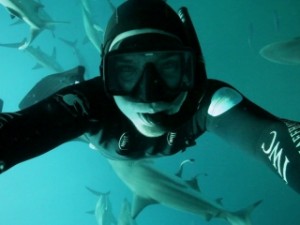 The way Rob Stewart weaves the story of Sharkwater into the story of Revolution is impressive and his keen knack for drawing the viewer in, right at the beginning, sets the tone and pace of Revolution. The film beings where Sharkwater left off, with Stewart jet-setting around the globe, meeting with officials and youth to spread the message of shark conservation. It’s when he arrives in China, a major epicenter of the shark debate (due to the consumption of shark fin soup by wealthy Chinese) that the film takes a major turn. While speaking at Sharkwater’s Chinese premiere, an audience member asks Stewart what the point of saving sharks is, when it’s predicted that worldwide fisheries will collapse within 50 years. Rob Stewart reveals that he didn’t know what to say, then sets out to create Revolution.

The film spends quite a bit of time on coral reefs. One of Stewart’s first stops is Papua, New Guinea to what he called “coral haven.” Here he gives viewers a background on coral biology and reveals some impressive footage of wild corals feeding on zooplankton, including tiny squid and fish. For a while Revolution covers the evolution and diversity of coral reefs, then suddenly it plunges you into areas of severe reef decline. Here the viewer is greeted by acres of dying reef, void of nearly any life, utterly caked in a layer of silt. Stewart does a good job of focusing on little details, while explaining the effects of ocean acidification on any marine life with a skeleton. One such detail is a slowly dissolving snail shell, full of tiny nooks and crannies, eroding away as the ocean fills with carbon and acidifies. Viewers are then taken to a predominantly dead reef, a place Stewart describes as the muck, where nutrient waste and decay from ocean acidification has settled, creating an ecosystem of its own. Interesting enough, in the muck, Stewart points out how flamboyant cuttlefish have adapted, thriving in a dying ecosystem. 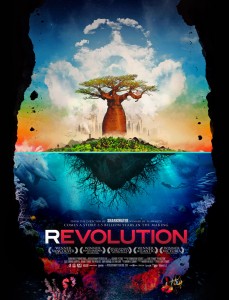 By taking viewers to carbon deposits, underwater areas where carbon bubbles out of the Earth, he creates a picture of what the oceans may look like in 50 years and it isn’t pretty. After speaking with several scientists and climate experts, it’s revealed that over-fishing combined with ocean acidification is slated to cause a worldwide fisheries collapse sometime around 2050. Experts all agree, that a time when seafood is simply unavailable is a likely consequence of several “human caused” phenomena.

Revolution then takes us around the world, from the tar-sands of Alberta, to climate conferences in Mexico, dissecting the world of fossil fuels and the political tools of deception that keep the gears grinding. At one point the focus turns to the social aspects of fossil fuels, how large nations like the United States and Canada attend conferences with smaller, poorer nations, where the effect of high carbon emissions has destroyed much of the landscape. These poor nations arrive at conferences to essentially plea for mercy, as they have little and are forced to watch the environment they live in die around them. In quick, closed door meetings at conferences intended to promote reducing greenhouse gases, deals are struck between large corporations and small nations, dressed up to appear like positive actions. In the end, thousands of acres of deforestation and sediment run off poison remote communities.

During the film Stewart spends time with indigenous activist groups, native people who have had their heritage lands badly damaged due to energy exploration and exploitation. It also points to indicator species, such as the Canadian Lynx, that follow boom or bust trends similar to humanity, investigating how climate change and energy development effects species with population explosion trends. It also points out that archeological evidence from ancient cultures suggests that once a trend started toward environmental decline, it wasn’t long until the entire civilization collapsed. 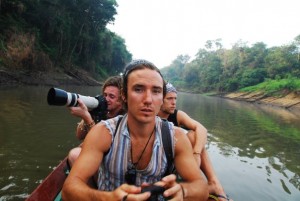 Stewart dramatically turns the camera on himself, admitting that he burns twice as much carbon per year as the average American, and five times as much as the average European. He then estimates that traveling the world to make Revolution, he burned an additional amount double that. At this point the film takes an important turn, recognizing that it isn’t only corporations and elected officials to blame, but our own greed and rate of consumption. By channeling the voices of those fighting for drastic change in climate policy, the film reveals that those pushing our environment toward decline for profit, are only feeding the demand we as a society have created. Somewhere in the equation, levels of consumption must be greatly reduced and each person must take responsibility for their own personal impact on planet Earth. Without that, it’s highly unlikely any change will occur and very likely that within 50 years humanity will be left with dead oceans and a challenging landscape for survival. It is estimated that the western culture of comfort and material satisfaction would require 6 planet Earth’s to support.

Throughout the film Stewart spends time with youth, pushing hard against the practices that lead to climate change, as it’s in fact their future that lies in peril if humanities’ practices do not change. Some of their efforts, like the ban of shark finning on Saipan in Micronesia, are met with success while others are violently removed from climate change conferences, so that their voices are not heard by world governments. It’s an established theme of the film that while all of us whom are adults may not see the disastrous effects of our lifestyle, those who will be adults in fifty years, or their children, will be left with a potential extinction scenario, with the human race as the species falling into history.

Perhaps the most powerful statement in the film comes in the form that western lifestyle is condemning innocent people to death. In areas of the Earth, climate change related incidents have led to mudslides, earthquakes and other disasters, which have put impoverished nations in severe distress and cost innocent human lives. Not only does humanities’ future face a bleak chance of survival, many in the present are condemned to death for the growth and expansion of others. The film challenges the viewer to take part in the revolution, by making changes to their own lifestyles. 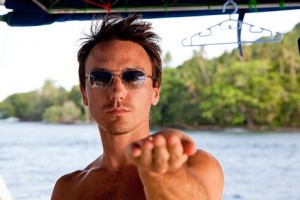 I am sure Revolution will be lauded by many as a far-left, fear mongering attempt to turn climate change into a human problem. They are right, if suggesting that Revolution makes climate change a human problem. The film shows how certain species will be able to thrive in the ecosystem that over consumption of carbon has created, one species that cannot is the human race. Skeptics who try to discredit Revolution will have their hands full, as the film features a host of scientists, climate advisors, experts and activists from all over the world. In fact it features some of the leading scientists in the field of monitoring climate change and providing solutions. The film has been released with an educational companion, providing school teachers and educators an entire course series to coincide with the film, which received a G (General Audiences) rating, allowing for it to be shown to elementary and middle school classrooms. My only complaint is that the scenes featuring Stewart cruising through the ocean in nothing but a Speedo make a return. However, I imagine the ladies in the audience won’t mind those scenes at all. In fact, I had an ex-girlfriend who refused to watch Sharkwater (saying it sounded boring) until I showed her the trailer which featured Steward lightly clothed, swimming along with sharks. Somehow then, she was quite interested in sharks. 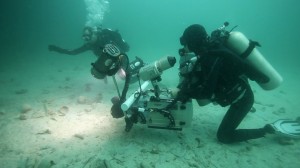 Shortly before watching Revolution, I received a breakdown of my personal household power consumption from Potomac Edison. I was shocked to learn that my household uses 92% more electrical power than homes of equal size. When I designed and built my home in 2013, I implemented the most energy efficient and environmentally safe building materials/methodologies I could afford. In fact I placed funding for these items above funding to make the home larger, which lead to a smaller but more energy efficient home. This resulted in the use of an advanced heating and cooling system, which uses propane only as a back-up source for heating, in circumstances of extremely cold temperatures. It’s so environmentally friendly in fact, that MD state regulations forced Potomac Edison to offer me an environmental rebate for installing the system over traditional heating and cooling. As you can imagine, I was shocked to learn of my power consumption. I knew where it was coming from, the 800 square feet of fish-room that occupies the basement level of my home. Watching Revolution was just the push I needed to re-evaluate my aquarium systems and begin scaling back-instead of scaling up. For a while I’ve been researching a solar system that could power my aquariums, along with some other household energy hogs. I hope this summer to put a system in place, relinquishing that energy burden, which currently is provided via a coal fired power plant.

As aquarists, we all use a hearty amount of power. In fact, some mega-tank owners boast about their unusually high power bill. As a community, perhaps one of the greatest discussions we can have is about how to create the most energy efficient systems possible, scale back and make the most of small nano-sized marine aquaria. The smaller the tank, the smaller footprint it leaves on the environment in a multitude of ways.