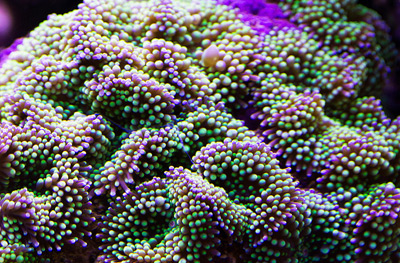 A group of Ricordea florida

As an American reefkeeper, it’s all too easy for me to forget that some truly gorgeous invertebrate livestock originates relatively close to home in the tropical western Atlantic and Caribbean. I was reminded of this recently when CC entrusted several of his Caribbean specimens to my care in advance of his pending move to the great state of Florida. By the way, if you “felt a great disturbance in the force” some weeks back, it had nothing to do with the destruction of Alderaan. More likely, it was just Chris’s head exploding at the thought of his prized Caribbean species intermingling with my lowly Indo-Pacific corals and fish.

Did I ever mention that CC is a terrible “species-ist”? Anyway, among this adopted assortment are several color varieties of Ricordea florida. Now, prior to receiving these specimens, it had been a long time since I’d given much thought to rics, and I’d forgotten how truly stunning these humble corallimorphs can be, so it was really nice to get reacquainted with them. They’re also fairly rugged, so whether you’re a beginner, intermediate, or advanced hobbyist, MORE