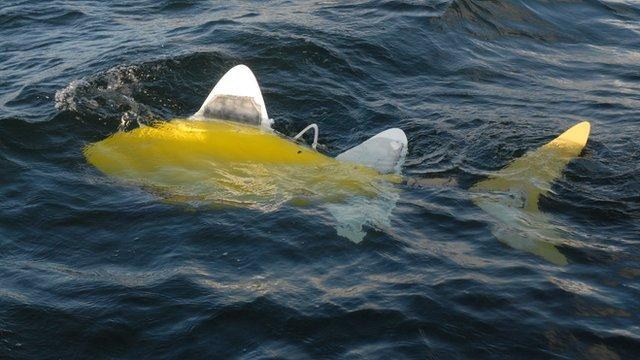 
The 1.5 meter long fish, made out of carbon-fiber, metal, and sensors, swims through the harbor much like an ordinary fish. Its batteries last eight hours and during the time that it is deployed, it works autonomously tracking down pollutants to their source.

“The idea is that we want to have real-time monitoring of pollution, so that if someone is dumping chemicals or something is leaking, we can get to it straight away, find out what is causing the problem and put a stop to it,” explains Luke Speller, a senior scientist at the research division of BMT Group, a technology consultancy.

The fish design was chosen over a propeller-based design as a way to make the overall unit more robust during autonomous activity. Propellers can get tangled and clog with marine refuse and seaweed. The fish design does not have this limitation and one of the main benefits of this design is it works very well in shallow water. It can also turn quickly when need arises. The fish are also “smart enough” to work alone or in groups using acoustic signals to communicate with one another.

That being said, these robotic fish will not be permanent residents of the harbor any time soon. The cost of an individual robofish is roughly £20,000 each ($31,600), although it’s said that costs will decrease as more and more units are produced.