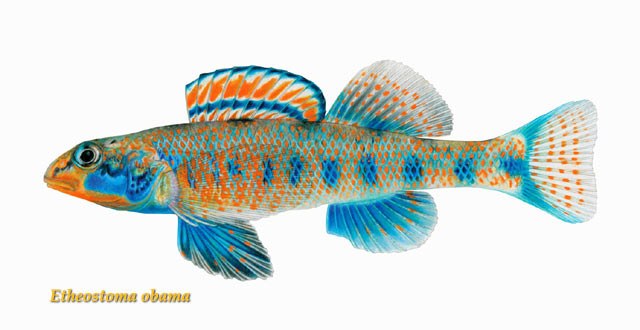 
The newly discovered species of freshwater darter are all from the genus Etheostoma, commonly known as “darters,” although several other genera also have “darters” in them as well.  This genus typically contains very colorful fish that show bright color variations from orange, blue, green, yellow, and red and range in size from less than an inch to two to three inches in length.

As mentioned, the five new species are named after four Presidents (both past and present) and one former Vice President. These elected officials’ names were selected as each worked hard to promote environmental protection and conservation during their time in office.

The newly named species (also pictured to the right) are:

Each of the fish, both above and to the right, are described in the paper published recently in the Bulletin of the Alabama Museum of Natural History “Morphological diversity and phylogenetics of the darter subgenus Doration (Percidae: Etheostoma), with descriptions of five new species” by Layman and Mayden.

The five elected leaders join an ever growing list of politicians and celebrities such as Bob Marley , Yoda, and Liv Tyler (a beetle, seriously?), that have species named after them.