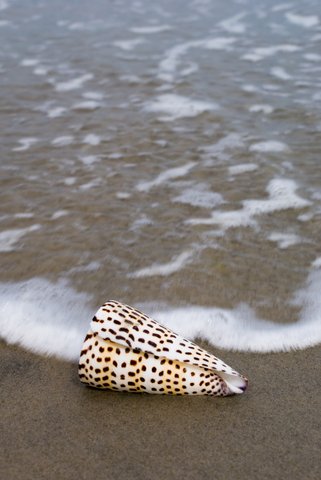 It’s common knowledge that there are certain things in the ocean that can kill a person, but it’s not every day that a hobbyist runs into one of them. Earlier this year I cared for a fire urchin that is rumored to have that ability, and with its extreme colors and obvious venom sacks, I didn’t doubt it for a minute. It was bright, big, and easy to pick out in the aquarium, and I steered clear of it for the most part. Recently I came across another deadly reef animal that was not quite so forthcoming with its abilities, and it made for an interesting experience.

The conus snail came in with a shipment of halloween hermit crabs, but it was quickly picked out as something entirely different. Halloween hermits often arrive living within conus shells, so it’s easy to see how the mistake was made, but instantly we noticed that instead of a crab there was a snail living inside. I quickly set it aside as something to look up when time allowed, but never got back to it. Two months went by and by chance it was identified by a customer as being a dangerous conus snail! Describing my reaction as surprised would be an understatement when I found out the snail I’d been reaching past all this time could have been a killer. I jumped to the wost-case (but safest) conclusion, that it could be the species that kills, and moved it into isolation. This wasn’t enough for me, so I also marked up the tank with warnings to keep any hands, including employees, out of the tank. With that kind of liability it’s just not worth the risk. 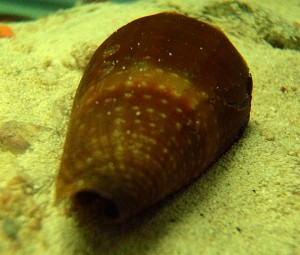 At this point the little snail was again put on the back burner, and there it sat in its isolation for another couple of weeks.

Conus snails come in many varieties with three distinct types. First, and most deadly, is the fish eater. Fish eating conus snails are the ones responsible for human deaths because they have the most powerful neurotoxin. There are also snail-eating conus which have a less powerful toxin, and the most common of the three are the worm eaters that share the less powerful toxin. Conus snails attack by shooting a poisoned barb into their victims. This barb is only shot out of the narrow end of the shell, so they are safe to handle as long as you don’t expose yourself to that end.

Naturally, customers and employees alike were very interested to hear just what was in the tank labeled as “Death”, and I was, of course, all too happy to explain it to them. I was also happy to get some good clean entertainment by picking it up to give them a better look and watching their faces change to worry. This little snail was really starting to grow on me, but it was time to find out for sure whether or not I was dealing with a killer. After doing a lot of research on the subject, I finally knew a little bit about the conus snails. The infamous fish eating conus has a very distinct flare in the shell opening at the narrow end which allows them to pull in and consume fish. This was a sigh of relief because the conus we had did not have any kind of flare. I decided at this point that it was most likely a common worm eater. All conus snails have very specific diets which makes them hard to care for in the aquarium, so for the snail’s sake, I decided it would be best if we put the snail down humanely.

Just when you think you have a nice safe indoor hobby, something will pop up and surprise you, so I would like to remind everyone to take a closer look at everything you put in your tank and be sure it IS what you think it is.

R.I.P. my little conus buddy. Thanks for the adventure.