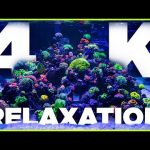 Join us as we take you on 4K- 4 Hour, Underwater Journey into one of our 750 gallon reef tanks. This video is great if you want to chill out and relax after a long day or if you are trying to get into your groove. It can even help if you have problems with sleeping, so you can fall into a relaxing, peaceful sleep

Fish Stock Up & Lots of Sales this Weekend only!!