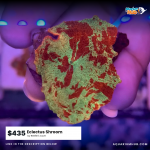 CLICK HERE TO VISIT OUR WEBSITE CLICK HERE TO ORDEREclectus ShroomWhat You See Is What You Get…BUY or SELL Fish, Corals, and EquipmentGet Fish, Corals and equipment shipped directly to your doormore listing and updates on our website.Register NOW!!www.aquariumhub.com

Jay Hemdal has kept aquarium fish since he was four. He set up his first marine aquarium in 1968 when he was nine years old. He later worked part time for many years at various local retail pet stores and fish wholesale companies while he was living at home and then during college. After graduating from college with a degree in aquatic biology, he managed the aquarium department of a large retail pet store for five years until 1985, when he was hired as an aquarist/diver (and later department manager) for a large public aquarium. In 1989, he accepted the position of curator of fishes and invertebrates for another public aquarium, where he remains today. Jay has written over 200 articles and papers as well as seven books since 1981.

It’s Time For A Change!