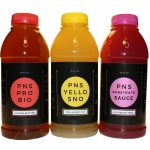 It’s totally understandable if you have a few questions about dosing the PNS (purple non-sulfur) bacteria-based products PNS ProBio, PNS Substrate Sauce and PNS YelloSno. For one, they’re all unusual products and it’s likely that you haven’t worked with anything like them before. Also, as with… www.hydrospace.store

How to Dose the PNS Products

James has been an aquarium hobbyist since childhood, and has been keeping marine aquariums for over thirty years. He is also an avid diver, and has spent many days on the reefs of Australia, the Bahamas, Egypt, Fiji, Florida, Hawaii, Indonesia, Japan, and Tonga. Many years ago, he also managed a large retail aquarium store, owned and operated an aquarium design, installation, and maintenance business, and spent a summer working as a diver/collector for an aquarium livestock wholesaler in Florida. James has also published over 450 articles with photographs in various aquarium and dive magazines in the U.S. and Europe, and has written and illustrated a half-dozen books on the topics of reef organisms and marine aquariums. He has given over 50 presentations at aquarium society meetings and conferences in the U.S., Canada, and Europe, as well.Aside from his lifelong aquatic interests and experiences, James served as an Army paratrooper, and earned degrees in Geology from Mississippi State University and the University of South Florida, with a specialization in invertebrate paleontology. He is currently a Professor of Earth and Environmental Sciences at Hillsborough Community College in Tampa, Florida.

Kenny of POTO Featured in The Wall Street Journal