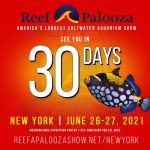 Only 30 days until showtime!.You can purchase your tickets ahead of time with a credit card by visiting www.reefapaloozashow.net/NewYork.Please note: NO credit card entrance ticket sales at the show(cash only ticket sales)

Martin began his career with a BS degree from FSU. His early professional career began in the 1961 as a fishery biologist with State of Florida. His research on the age, growth, and reproduction of the Red Grouper resulted in a classic paper in 1969 that is still in demand after 50 years and is available on the internet. This was also his theses for a MA Degree at USF. He was Director of Biological Research with a commercial company in the late 1960s, early 70s, and developed the basic technology for the culture of Pompano. He began an aquaculture project in 1972 that resulted in the first commercial rearing of a marine tropical fish, the common clownfish. He published the first account of the culture of clownfish in the March/April 1973 issue of Salt Water Aquarium Magazine. And founded Aqualife Research Corporation later in 1973. After a move to the Florida Keys, other marine tropical fish followed including numerous species of clownfish, neon gobies, and marine angelfish. Publication in the form of magazine articles followed these advancements. Martin and his wife Barbara also founded Green Turtle Publications in 1982 and published a number of books dealing with the marine aquarium hobby during from the early 80s to 2000. The Marine Aquarium Handbook: Beginner to Breeder, has been through 3 editions and at least 25 printings. The 3rd edition was a complete rewrite and publication by Microcosm Ltd and T.F.H. Publications. The Marine Aquarium Reference: Systems and Invertebrates followed in 1989 and the second edition in 1992 and it also enjoyed commercial success. Over the years up to the present, there were other books, many magazine articles, and many adventures into the world of marine aquariums, marine aquaculture, diving, and coral reefs. His most recent book is now in publication, The Diadema Culture Manual, which should be available by mid-2021. Spawning on demand, mass larvae culture through settlement, metamorphosis, growth to adult, and reproduction through the third generation was accomplished