Salty Q&A: Are Fish in Nanos More Likely to Leap? 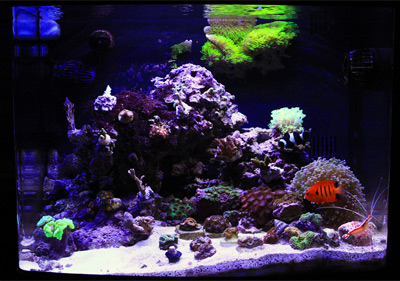 This question, recently posted on our website by Eric B, got me thinking about some of the assumptions we tend to make about nano aquariums. So, in addition to my original answer to Eric’s inquiry, I’ve included a few more random thoughts on the subject afterward.

Question: Do you think that nano reef tanks are more likely to have fish jump from them, or is that not really a factor in your eyes?” – submitted by Eric B

Answer: I think as long as the fish in question is 1) an appropriate nano candidate from the standpoint of maximum size and energy level, 2) not crowded or harassed by tankmates, 3) provided adequate niches for rest and refuge, and 4) kept in good water conditions, there’s no reason it should be especially prone to jumping. Of course, these same caveats apply to fish kept in any system, nano or otherwise.

That being said, it is much more challenging to find fish species that are well suited to nano tanks than to larger systems. So I suppose one could argue that fish jumping is more likely to be an issue with nano tanks in general, merely because it’s all too easy to stock them inappropriately.

Building on this last point, it’s tempting to think that all bad things happen more rapidly or are more likely to occur in nano systems than in larger ones, but the reality of the situation is a bit more complex. It’s true that smaller aquariums are inherently less stable than larger systems with respect to temperature and other water parameters (which is why we don’t encourage beginners to start with nanos); however, I believe success or failure with a nano tank ultimately comes down to maintaining a sense of proportionality MORE