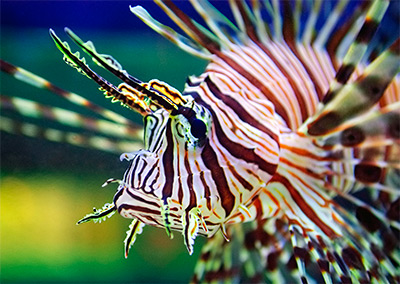 Question: I have a volitans lionfish that’s been in my 200-gallon tank for over two years, and lately it has begun to act like it can’t see. At feeding times, it makes an effort to grab food that’s drifting by but usually misses—like it can tell that food is in the water but can’t see it well enough to get it in its mouth. Is there a way to tell if this fish is actually going blind versus having some other health problem? – Submitted by Sean Myles

Answer: Thanks for your question, Sean! In his book The Salt Smart Guide to Preventing, Diagnosing, and Treating Diseases of Marine Fishes, Jay Hemdal addresses the issue of blindness in fish—specifically the subtle symptomatic differences between a fish that is going blind and one that is actually ill to the point of becoming moribund. Here is that particular excerpt from his book, which I think will answer your question better than I can: Blindness A very common symptom reported by home aquarists is that one of their fish has become blind. This, more often than not, is a result of a fish becoming ill to the point that it is moribund (close to death) and is not just blind. Basically, a fish that bumps around the aquarium, runs into the tank sides, and ignores food may not be blind at all; it may just be dying MORE