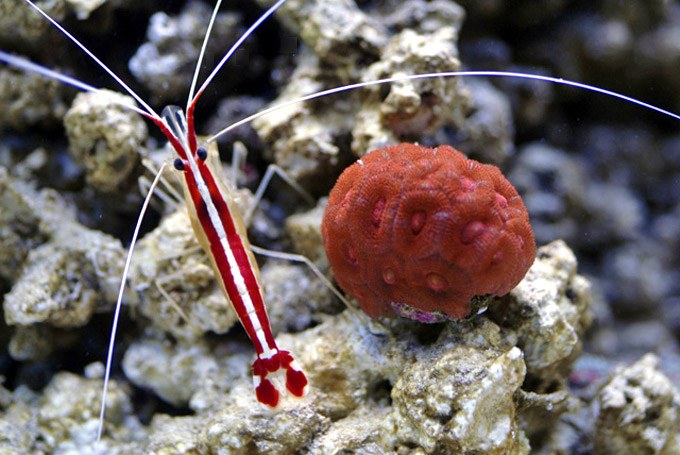 Cleaner shrimps aren’t as sociable as you might believe.


There can be only two

Lysmata amboinensis are protandric simultaneous hermaphrodites, meaning every cleaner shrimp is born a male but develop female reproductive organ as he matures.  Sexually mature L.amboinensis have both male and female reproductive organs but can not self-fertilize, so they must pair up with another shrimp to reproduce.  Anyone looking to breed cleaner shrimps – or regularly spawn shrimp larvae to serve as natural zooplankton for their corals/fish – only needs to place two shrimps together in the same tank.

However, if you place more than two cleaner shrimps in the same tank, the situation can get ugly.  Researcher Janine Wong and Professor Nico Michiels (University of Tubingen) placed cleaner shrimps in multiple groups of two, three or four in separate small tanks.  Within 42 days, all tanks only had a pair of shrimps still alive. The dominant pair simply killed off the other shrimps in their tank.  The researchers hypothesize this aggression is motivated by reducing competition for clients (and subsequently food source) within their cleaning station area.  All subjects in this experiment were provided ample food, so the results suggest cleaner shrimps may be genetically “hard-wired” to behave this way.  The big question that lingers: How large of a cleaning station area (e.g. aquarium) do cleaner shrimps require to allow for more than one pair to coexist?

Their research, “Control of social monogamy through aggression in a hermaphroditic shrimp,” is published in the scientific journal Frontiers of Zoology.  The paper’s abstract states:

Exactly one individual in each triplet and exactly two individuals in each quartet were killed in aggressive interactions, resulting in group sizes of two individuals. All killed individuals had just moulted. No mortality occurred in single and pair treatments. The number of moults in the surviving shrimp increased significantly after changing from triplets and quartets to pairs.

So for anyone considering buying more than two cleaner shrimps for their aquarium (at least smaller aquariums), reconsider;  Chances are, you will still end up with just a pair.

An interesting side-fact about Lysmata amboinensis: Cleaner shrimps can only assume the female role a few hours after molting, while they can assume the male role at any time, even when incubating eggs.