Scientists are Studying the Biological Relationship Between Corals and Marine Bacteria 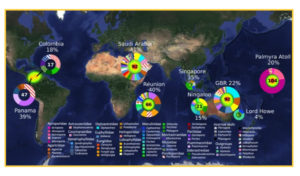 The relationship between bacteria and corals has recently become a hot topic on Reef2Reef as a result of a research paper recently published in the Nature journal. The study estimates that about 1/3 of all corals worldwide are infected with this newly discovered bacterium which researchers named Candidatus Aquarickettsia rohweri. The bacterium can be found in a number of corals that we commonly keep in our aquariums including Acropora, Goniopora, Montipora, Seriatopora, and Stylophora species. Additionally, it can be found in anemones. Researchers also discovered the bacterium can be transmitted through coral-eating parasitic snails and transported through seawater whereby it can potentially infect corals where tissue damage is present.

Corals that are infected with Candidatus Aquarickettsia rohweri exhibit little to no growth. Researchers hypothesize the MORE